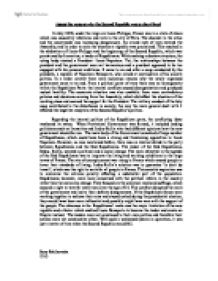 Assess the reasons why the Second Republic was so short lived

Assess the reasons why the Second Republic was so short lived In July 1848, under the reign on Louis Philippe, France was in a state of chaos which was caused by rebellions and riots in the city of Paris. The disorder in the cities and the countryside was increasing dangerously. An armed mob of men entered the Assembly, and in order to calm the situation a republic was proclaimed. This resulted in the abdication of Louis-Philippe and the beginning of the Second Republic, which was proclaimed by Lamartine, a leader of Republicans. While seeking a decisive structure, the ruling body elected a President- Louis Napoleon. Yet, the relationships between the president and the government were not harmonious and a president appeared to be too engaged with his personal ambitions. It came to an end after a coup conducted by the president, a nephew of Napoleon Bonaparte, who aimed at continuation of his uncle's politics. In a wider context there were numerous reasons why the newly organised government came to an end. From a political point of view there was no homogeneity within the Republican Party: the internal conflicts caused disorganisation and produced mutual hostility. ...read more.

First of all, this was because the Red Republicans had no experience in organising such big and it was rather a question of luck than real economic strategy that even those people were given a place in the workshops. The idea of the National Workshops had two main effects: first of all the people who did not receive a placement were disappointed and criticised the government for failing to keep up their promise. The second, just as important effect of the scheme, was the loss of support from the bourgeoisie, who were angered by the fact that their tax was increased dramatically to finance the workshops. By July people were irritated with lack of improving the situation and decided to take action themselves. The July Days are known as the period of protests against the National Workshops which were evidently too expensive and not functioning as they were meant to. Traditional barricades were set up in the poorest parts of the city and many people armed marched to the streets with the aim to demonstrate to the government their hostile attitude. The reaction of the government surprised the people: with General Cavaignac in charge, many troops were brought in to restore order in the city. ...read more.

He organised public petitions to help him persuade the Legislative Assembly, however his plan failed through the veto from to the Assembly. Arguing that he was working on behalf of the nation, Louis Napoleon decided to change the constitution himself. To achieve this he prepared a detailed plan of action how to overthrow the Republic. Louis Napoleon's organisation of coup d'�tat involved both civil and military members of society. He successfully abolished the dominant government on 2nd December 1851 without the use of power. The leading politicians who were suspected of organising opposition were arrested early that morning. The president eliminated the assembly and introduced his own aims to the people. The characteristics of his politics was not initially antagonistic towards the Second Republic, yet the direction of events led him to the major turn against those who originally elected him. The Second Republic was affected by internal politics, the economy of the country, the structure of the leadership, and the ambitions of Louis Napoleon himself. When merged together at the highest point of social and political tension, these factors brought about a critical change in the end of the Second Republic. The liberal values which were the foundation of the republican constitution were to be soon replaced by the dictatorship of the second Emperor. ?? ?? ?? ?? Suzy Rabikowska 12 O ...read more.