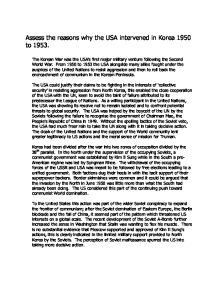 Assess the reasons why the USA intervened in Korea 1950 to 1953. The Korean War was the USA's first major military venture following the Second World War. From 1950 to 1953 the USA alongside many allies fought under the auspices of the United Nations to resist aggression and then to roll back the encroachment of communism in the Korean Peninsula. The USA could justify their claims to be fighting in the interests of 'collective security' in resisting aggression from North Korea, this enabled the close cooperation of the USA with the UN, keen to avoid the taint of failure attributed to its predecessor the League of Nations. As a willing participant in the United Nations, the USA was showing its resolve not to remain isolated and to confront potential threats to global security. The USA was helped by the boycott of the UN by the Soviets following the failure to recognise the government of Chairman Mao, the People's Republic of China in 1949. ...read more.

There is no substantial evidence that Moscow supported and approved of Kim Il Sung's actions, this is clearly indicated in the limited military support provided to North Korea by the Soviets. The perception of Soviet malfeasance spurred the US into taking more decisive action. The US military establishment and defence department pounced on Korea as the means to expand US 'peacetime' defence spending, the proposals of NSC-68 to increase spending on nuclear and conventional forces had a limited impact on Truman and Congress until Korea provided the pretext for escalating US military commitment. Korea also came at an appropriate time for politicians keen to play on the 'Red Scare' like Senator McCarthy, in an atmosphere of intimidation, it was vital for the US government to be seen to be acting tough in the face of communism. It is uncertain whether the US intervened in Korea in order to contain communist North Korean expansion or to eradicate communism from the peninsula, a policy of 'rollback'. ...read more.

The US had grown weary of their involvement, unsure of what their role or purpose had been. US involvement in Korea stemmed from the desire to contain communism, had non-communist aggression been involved then it is inconceivable for Truman to take the action that he did. The involvement of the UN did little more than provide a legitimate pretext for US action and allow it to show moral leadership. US concerns were not about the inhabitants of Seoul or Pyongyang but rather in the interests of preventing, what it feared was the inexorable, expansion of communism in Asia. Once containment had been achieved then the US sought to push the frontiers of communism back in response to domestic pressures and military interests. The failure to strike this decisive blow against Korea, China or the Soviet Union then led to disenchantment and US desire to disentangle itself from its commitment. These were the reasons why the USA intervened in Korea 1950 to 1953. ...read more.