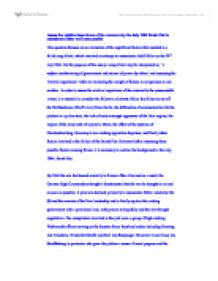 Assess the relative importance of the reasons why the July 1944 Bomb Plot to assassinate Hitler was unsuccessful. This question focuses on an evaluation of the significant factors that resulted in a failed coup d'etat, which involved an attempt to assassinate Adolf Hitler on the 20th July 1944. For the purpose of this essay a coup d'etat may be interpreted as; ' a sudden overthrowing of government and seizure of power by others' and assessing the 'relative importance' refers to evaluating the weight of factors in comparison to one another. In order to assess the relative importance of the reasons for the unsuccessful event, it is essential to consider the failure to eliminate Hitler, the failure to cut off the Wolfsschanze (Wolf's Lair) from Berlin, the difficulties of communication for the plotters in a police state, the lack of unity amongst opponents of the Nazi regime, the impact of the army oath of loyalty to Hitler, the effect of the systems of Gleichschaaltung, Germany at war making opposition hopeless, and finally other factors involved in the failure of the Bomb Plot. However before assessing these possible factors causing failure, it is necessary to outline the background to the July, 1944, Bomb Plot. By 1944 the war had turned crucially in favour of the allies and as a result, the German High Commanders thought it fundamental that the war be brought to an end as soon as possible. A plan was devised, primarily to assassinate Hitler, neutralise the SS and the remains of the Nazi leadership and to finally replace the existing government with a provisional one, with powers to hopefully end the war through negotiation. The conspirators involved in the plot were a group of high-ranking Wehrmacht officers serving on the Russian front, they key leaders including Henning von Tresckow, Friedrich Olbricht and Karl von Stulpnagel. However it was Claus von Stauffenberg in particular who gave the plotters a sense of moral purpose and the enthusiasm needed in order for it to have a chance of success. ...read more.

Moreover the German police state was decidedly effective in eliminating opposition at all levels of society. For example, this is indicated by the arrest of von Moltke in January 1944, a key leader in the Kreisau Circle to which von Stauffenberg had become attached. A further problem was the conspirator's inability to gain the support of any outstanding frontline commanders in the major German cities and consequently the conspirators based in Berlin came to be of crucial importance.9 Through methods of consolidation power, the mixture of legality and violence, of authoritarian powers from above and the Nazi revolution from below, Hitler established his dictatorship so that by late 1934 it was impossible to remove him legally. Subsequently Hitler was able to keep power through genuine support for successful policies, through propaganda and indoctrination and through systems of repression. Consequently, there was a lack of widespread opposition to the Nazi regime and what opposition evolved was largely ineffective for a number of reasons. Political opposition was divided between left and right and within the left KPD and SPD parties. There was also a crucial underestimation of Nazi power potential from both political elites and from the other popular parties of the centre and left who believed that Fascism would not last and that Hitler could be manipulated in the meantime. Thus, whilst there was a wide variety of opposition to the Nazi regime, the number of actual registers was small and their aims and methods were uncoordinated This crucial lack of unity, the isolation of opposition groups, meant that the Nazi regime was secure and was only brought down by the vast coalition of enemy powers.10 For example, the July 1944 Bomb Plot resulted from a military conspiracy, (which involved two long-established civilian underground groups, which had contrasting political aims.) in the background of which stood two long-established civilian underground groups, but which differed in their political aims. ...read more.