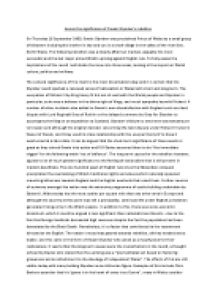 ﻿Assess the significance of Owain Glyndwr?s rebellion On Thursday 16 September 1400, Owain Glyndwr was proclaimed Prince of Wales by a small group of followers including his brother in law and son in a small village in the valley of the river Dee, North Wales. The following rebellion was a bloody affair but marked, arguably the most successful and the last major armed Welsh uprising against English rule. To fully assess the implications of the revolt I will divide the issue into three areas, looking at the impact on Welsh culture, politics and military. The cultural significance of the revolt is the most discernable today and it is certain that the Glyndwr revolt sparked a renewed sense of nationalism in Wales both short and long-term. The usurpation of Richard II by King Henry IV did not sit well with the Welsh people and Glyndwr in particular, as he was a believer in the divine right of Kings, and much sympathy lay with Richard. A number of other incidents also added to Owain?s own dissatisfaction with England such as a land dispute with Lord Reginald Grey of Ruthin or the delayed summons by Grey for Glyndwr to accompany the King on an expedition to Scotland. Glyndwr?s failure to send men was tantamount to treason and although the original decision concerning the land dispute under Richard II ruled in favour of Owain, Lord Grey used his close relationship with the usurper Henry IV to have it overturned at a later date. ...read more.

Hotspur and the Percy?s wanted negotiated Peace in Wales and formed a brief truce so Owain could meet with Henry, however this was met with the King?s disapproval as he believed the rebellion should be crushed with force. The King established a new integrated command in Wales on the 1st April 1403, completely undermining the Percy?s who were originally charged with suppressing the rebellion. It can be strongly argued that this is hugely important concerning the significance of the revolt as the family had pre-established power bases both in England and Wales and could offer thousands of troops to aid Owain. In addition to this, Henry actually considered the Percy?s a greater threat than the Welsh. While it cannot be denied that the alliance with Hotspur was a major development in the short-term, there is also substantial evidence to suggest that, on the whole, his involvement was nowhere near as significant as it should have been. Hotspur had the reputation of being hot-headed and rash (hence the nickname) and angry with the King after his proposal of negotiated peace being rebuffed, he Marched on Shrewsbury with 15,000 men less than two weeks after. The Percy?s held power bases in both nations and were a formidable military force but the extremely short preparation time for the battle of Shrewsbury provides strong evidence that their involvement was not as significant as it could have been. ...read more.

with a training ground which would prepare him for future foreign campaigns such as the 1415 siege on Harfleur and battles at Agincourt. He fought at the battle alongside his father where Hotspur was killed and his uncle captured. This battle was in many ways a lost opportunity for Glyndwr, with a little more planning and deliberation over how to implement the Percy?s military force, Henry could have been toppled but the significance however lies in the fact that it was a waste of a great chance and resulted in the loss of two powerful allies. The Glyndwr rebellion had several areas of long and short-term significance as well as many aims and endeavours that had mixed success. Things such as a re-enforced sense of nationalism survive today as well as the resulting Lancastrian dominance and the evolution of military tactics being other important areas of Long-term significance. The revolt arguably achieved the recognition of one single ruler of Wales and the capture of Key castles such as Cardiff and Newport, however after weighing up the significance of the rebellion, the many objectives that were not achieved such as the Tripartite Indenture, ultimate military victory over England, meaningful support from external allies and Owain?s overall plans for Wales means that Glyndwr?s revolt is confined to being of purely short-term significance. The only meaningful significance he holds in Wales today is the ?father of nationalism? and an icon rather than the man who brought independence to Wales as he would have hoped. ...read more.