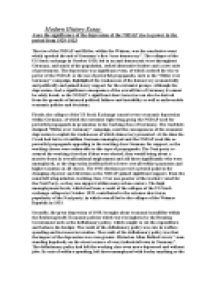 ﻿Modern History Essay a***s the significance of the depression of the NSDAP rise to power in the period from 1929-1933 The rise of the NSDAP and Hitler, within the Weimar, was the conclusive event which sparked the end of Germany?s first ?true democracy?. The collapse of the US Stock exchange in October 1929, led to an anti-democratic wave throughout Germany, and much of the population, seeked alternative leaders and a new style of government. The depression was significant event, of which assisted the rise to power of the NSDAP, as the use of powerful propaganda, such as the ?Hitler over Germany? campaign, highlighted the weaknesses of the democracy economically and politically and gained heavy support for the extremist groups. Although the depression,, had a significant consequence of the overall fate of Germany it cannot be solely based, as the NSDAP?s significant short term rise can also be derived from the grounds of internal political failures and instability as well as unfavorable economic policies and decisions. Firstly, the collapse of the US Stock Exchange caused severe economic depression within Germany, of which the extremist right wing group the NSDAP used for powerful propaganda in promotion to the working class of Germany. ...read more.

The depression of 1929, had clearly made democracy seem vulnerable to an economic collapse , and the scrambling efforts made by Bruinig, such as the development of the deflationary policy only made the crash seem more substantial, and at the price of losing various support to the extremist groups such as the NSDAP. Although the depression did ultimately lead to the substantial short tem rise of the NSDAP it cannot be the sole motive. The division of the left, political instability and a naïve view of n**i Power and its capability all are liable for the short term rise to power of the NSDAP. The political instability which had arose from the fall of the Muller Government in 1930 contributed largely to the rising dominance of the NSDAP, and the eventual rise of Hitler in the position of chancellor. The political division amongst the left was certainly a major factor in the fanatical rise of Hitler and the n**i Party. A long feud had been running between the German Communist Party and the Social Democratic Party, of which had begun when the SPD had eliminated the Spartcists movement in 1919. The conflict between the two allowed the n**i Party to establish itself amongst major politics, if the two parties need not participate in conflict and unification could have used against the growing fear of the NSDAP. ...read more.

The role of Von Papen in the rise of the NSDAP during the time period of 1929-1933 played a decisive role in the overall outcome. His ?final deal? in January, proposed that Hitler come to power and his position to become Vice Chancellor. His persuasition of Hindenburg to instate Hitler as Chancellor played the final role in the overall conclusion of democracy. Von Papen?s belief that he could control Hitler while in power, highlights the overall failure in which Papen showed. Papen?s underestimate of the Nazis is shown through his description of the proposal that of ?no danger at all?. The rise of the NSDAP during the time period therefore must also become liable to Von Papen has his false predications of Hitler and his movement allowed, the NSDAP to gain control of Germany legally, as well as the official support by German people and its Army. In conclusion, the depression was significant through that it cause major economic and social depression amongst Germany. The ways in which it had been addressed also led to powerful propaganda by the NSDAP assisting their rise to power. Alternatively external elements such as the divisions on the left as well as the political failures by the leaders of Germany lead to the overall rise of the NSDAP during the time period of 1929 to 1933. ...read more.