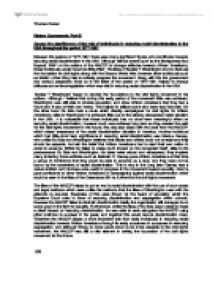 Assess the significance of the role of individuals in reducing racial discrimination in the USA throughout the period 1877-1981.

History Coursework: Part B Assess the significance of the role of individuals in reducing racial discrimination in the USA throughout the period 1877-1981 Between the periods of 1877-1981 there were many significant figures who contributed towards reducing racial discrimination in the USA. Although without events such as the Montgomery Bus Boycott, WWII or the actions of the NACCP to change attitudes towards African Americans, these individuals would have had little effect. The likes of Booker T Washington and Du Bois set the foundation for civil rights along with the Second World War; however other individuals such as Martin Luther King help to actively progress the movement. Along with this the government and various presidents more so in the latter of the period of 1877-1981 helped to change attitudes and enforce legislation which was vital in reducing racial discrimination in the USA. Booker T Washington began to provide the foundations to the civil rights movement in his actions. Although I believe that during this early period of the movement little was achieved, Washington was still able to provide education, and show African Americans that they had a future and it was at their own mercy. ...read more.

As the attitudes towards African Americans changed after the war in the 1940's many civil rights activists saw their time to join the civil rights movement. One of these activists was Martin Luther King who used methods of non-violence in order to gain sympathy from whites and in doing so change attitudes towards black Americans. Although his views were similar to those of Du Bois' views, King had more effect on reducing racial discrimination. Particularly in attempts to eliminate desegregation. This was likely to be partly due to how far the civil rights movements had advanced by King's time, in particularly down to WWII which changed attitudes. King gave confidence to Black American's; he used television and media to convey his ideas through speeches which were very influential and very much a trait of his. King was often compared as similar to Washington and Du Bois, although he did much more to reduce discrimination. His direct actions in the likes of the Montgomery Bus boycott. This event was critical in reducing racial discrimination as it saw black Americans united as one to fight for their cause, its success showed that with the unity of African Americans civil rights could be achieved, and also proved that the likes of King needed events such as the boycott to achieve anything as an activist. ...read more.

Although this had much more significance than many activists in this later period, it was still influenced because of activists in the early stages of the civil rights movement, which make the likes of King more significant. In conclusion, in the period of 1877-1981 individuals were the most significant in reducing racial discrimination. Early activists such as Washington and Du Bois had little opportunity to reduce discrimination due to the widespread discrimination and the likes of the KKK, however, events such as WWII enabled activists to emerge, as attitudes towards African Americans had began to change. Using the ideologies of previous activists the most important individual King was able to use events such as the Montgomery Bus Boycott and the likes of television to share his speeches and views, helping to pass legislation, change attitudes and give black Americans the confidence to further the civil rights movement. King helped to convey the on-going discrimination problem in the USA towards the government, which enabled presidents to take action with the likes of the Voting Rights Act of 1965 which brought about further equality for blacks. Although towards the latter stages of the movement the government had more effect on reducing racial discrimination by passing legislation. Word count: 1,970 ?? ?? ?? ?? Thomas Corder Thomas Corder ...read more.

This is a very strong response, that focuses well on the question throughout and balances the role individuals played against the importance of their context. Conclusions are logical and well supported by the main body of the essay.