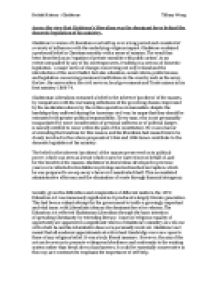 ﻿British History : Gladstone Tiffany Wong Assess the view that Gladstone?s liberalism was the dominant force behind the domestic legislation of his ministry. Gladstone?s version of Liberalism was built up over a long period and consisted of a variety of influences with the underlying religious impact. Gladstone combined a profound belief in Christian morality with a sense of mission. The result has been described as an ?equation of private morality with public action?, to an extent unequalled by any of his contemporaries, resulting in a serious of domestic legislation. A major series of changes concerning not only Ireland and the introduction of the secret ballot, but also education, social reform, public houses, and legislation concerning prominent institutions in the country such as the army, the law, the universities, the civil services, local government and Trade unions in his first ministry 1868-74. Gladstonian Liberalism contained a belief in the inherent ?goodness? of the masses, by comparison with the increasing selfishness of the governing classes. ...read more.

Gladstone?s act meant that all academic appointments at oxford and Cambridge were now open to those of any religious belief. It was a truly liberal measure. However, the aim of the act can be seen as to promote widespread obedience and conformity to the existing system rather than break down class barriers. It could be essentially conservative in this way as it continued to emphasis the importance of self-help. In terms of religious influence, the disestablishment of the Anglican Church in Ireland was the most successful piece of Gladstone?s Irish legislation in that it removed a major Irish grievance and extended the principle of religious liberalism to Ireland, which further enhanced the influence of early Liberalism ideas in Gladstone as a root of the reforms. The army reforms of Edward Cardwell improved reputation of the British army, but also brought out the humanitarian side of Gladstonian Liberalism as well as its concern for administrative and operational efficiency, and for the removal of unjustified privilege. ...read more.

Fundamentally, Gladstone had no sympathy with any notion of redistributing wealth; he had no intention of developing a graduated income tax for this purpose and strongly opposed an attempted to introduce death duties in 1894. He opposed any concept of the welfare state since he firmly believed in laissez-faire developed from one of the cardinal Victorian virtues ? self-help?. He also did not have any vision of the readjustment of the social order which might be accomplished by education. The extend to which he aimed to improve the condition of the working class due to his Liberalism previously developed, was highly questionable. Nonetheless, the catalogue of achievement was considerable and the character of nineteenth-century liberalism is clearly shown in the various issues tackled. Although such measure showed that Gladstonian Liberalism had an unintentional capacity of provoking discontent in a wide range of public opinion and interest groups, It cannot be denied that Gladstone?s liberalism was the dominant force behind the domestic legislation of his ministry; on a social, economical, political and religious aspect. conscien ...read more.