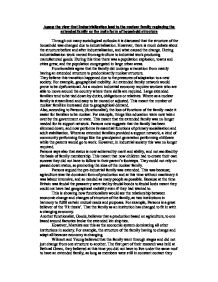 Assess the view that Industrialisation lead to the nuclear family replacing the extended family as the main form of household structure.

Assess the view that Industrialisation lead to the nuclear family replacing the extended family as the main form of household structure Through out many sociological outlooks it is discussed that the structure of the household was changed due to industrialisation. However, there is much debate about the structure before and after industrialisation, and what caused the change. During industrialisation work moved from agriculture to industrial work producing manufactured goods. During this time there was a population explosion, towns and cities grew, and the population congregated in large urban areas. Functionalists agree that the family did undergo a transition from mainly having an extended structure to predominantly nuclear structure. They believe this transition happened due to the pressures of adaptation to a new society. For example, geographical mobility. An extended family network would prove to be dysfunctional. As a modern industrial economy requires workers who are able to move around the country where there skills are required. Large extended families tend to be tied down by duties, obligations or relatives. Where as a nuclear family is streamlined and easy to be moved or adjusted. This meant the number of nuclear families increased due to geographical demand. Also, according to Parsons, (functionalist), the loss of functions of the family made it easier for families to be nuclear. ...read more.

He found only 10% of households in England from 1564 to 1821 included kin beyond the nuclear family. The figure for Great Britain in 1981 was similar, 9%. Laslett claims this shows that nuclear families were the norm in pre-industrial England. He then found similar results in Western Europe. However, the first figure was England (10%), where as the other was of Great Britain (9%), this is then not very accurate. Also, perhaps some families were missed off of the Parish Records; this shows relying on other data means they can never be sure their results are 100% correct. Also, his research was based on households, but people do not have to live together to be an extended family. Extended families may have been important even though relatives lived in neighbouring households. One of Laslett's arguments against theories of sociologists such as Parsons, who believe that the pre-industrial family was extended, is in pre-industrial times the mortality rate was so high that very few people would have lived long enough to assume the role of grandparent, especially in the lower classes. Laslett says that the higher classes had extended households. Having wider kin and servants. This is because older members were richer and could afford good healthcare and servants. Where as the lower classes had such high mortality rates families were mainly nuclear, but if it did have older generations they tended to live together due to over crowding. ...read more.

Even amongst middle class families, the one most would expect to have a small nuclear family as they are less tied to a location because of poverty or wealth is still shown through empirical evidence that a modified nuclear arrangement is still and has been very popular as a family structure. In conclusion the connection between the nuclear family and industrialisation is not a valid argument, as many of the points supporting this, from sociologists such as Parsons have been proved mainly wrong. However, not all functionalists can be judged by this as some have different opinions. As writes such as Goode have questioned whether the nuclear family is even the best structure suited to modern societies shows how he does not fit into the typical functionalist view. Also, the functionalist Litwak describes how nothing is truly nuclear or truly extended. Taking into consideration new ideas of family structure, such as the modified nuclear family, meeting somewhere in between. Overall it is a mistake to say that families before industrialisation was extended, just as it is a mistake to say after it was nuclear. Other things had to be taken into account when considering change in family structure, such as, capitalism or social relationships. Finally, we cannot assume that all people whatever class they were in had the same experiences, as different classes experienced the industrialisation process differently. ...read more.