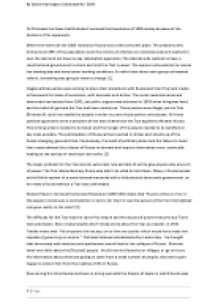 Assess the View that Nicholas II survived the Revolution of 1905 mainly because of the divisions of his opponents.

﻿By Daniel Harrington Candidate No: 5093 15.10 Assess the View that Nicholas II survived the Revolution of 1905 mainly because of the divisions of his opponents. Before the events of the 1905 revolution Russia was a very turbulent place. The peasants who formed over 80% of the population were the victims of a famine on a biblical scale and wanted to own the land and not have to pay redemption payments. The Liberals who wanted to have a constitutional government to share and limit the Tsar?s power. The workers who wanted to reduce the working day and have better working conditions. So with these three main groups all wanted reform, something was going to have to change. [1] Illegal political parties were arising to share their discontent with Russia and their Tsar and create a framework for ideas of revolution, with demands and strikes. The social revolutionaries and democrats had existed from 1901, yet public support was achieved in 1905 when living was hard, and the belief of god and the Tsar had been slowly lost. These parties were illegal, yet the Tsar (Nicholas II) could not satisfy the people in order to prove these parties unnecessary. All these political opponents were a symptom of the lack of attention the Tsar applied to Mother Russia. How strong actions needed to be taken and the hunger of the people needed to be satisfied at any scale possible. The participation of these parties resulted in strikes and a build-up of the Russia changing, general strike. Conclusively, the build of political parties and the failure to heed their needs allowed the citizens of Russia to demand and express themselves more, eventually leading to the activity of revolution and strike. [2] The major problem for the Tsar was his autocratic rule and lack of will to give anyone else any sort of power. The Tsar dismantled any Duma who didn?t do what he told them. ...read more.

They have made up their minds to gather at the Winter Palace tomorrow at 2 p.m. to lay their needs before thee. Do not fear anything. Stand tomorrow before the party and accept our humblest petition. I, the representative of the workingmen, and my comrades, guarantee the inviolability of thy person?. Following that an extract from the petition sent to the Tsar from George Gapon ?We workers, our children, our wives and our old, helpless parents have come, Lord, to seek truth and protection from you. We are impoverished and oppressed, unbearable work is imposed on us, we are despised and not recognized as human beings. We are treated as slaves, who must bear their fate and be silent. We have suffered terrible things, but we are pressed ever deeper into the abyss of poverty, ignorance and lack of rights?. [4] Over 150,000 people signed the petition and on 22nd January, 1905, Gapon led a large procession of workers to the Winter Palace in order to present the petition to Nicholas II. When the procession of workers reached the Winter Palace it was attacked by the police and the Cossacks. Over 100 workers were killed and some 300 wounded. The incident, known as b****y Sunday, signalled the start of the 1905 Revolution. [4] A dairy extract from the Tsar writing on the 22nd January, 1905 ?A painful day. There have been serious disorders in St. Petersburg because workmen wanted to come up to the Winter Palace. Troops had to open fire in several places in the city; there were many killed and wounded. God, how painful and sad?. [4] ?There are some striking similarities between the situations in 1905 and 1917. In both cases, popular unrest arose partly out of military failure, and liberal and proletarian objectives coincided. Nicholas survived in 1905 because the army remained basically loyal, allowing him the option of repression. ...read more.

Beryl Williams writes that the Kadets “talked of universal suffrage, and some even called for a republic and votes for women. The Kadets had much popular support, with a radical programme and over 350 local branches by 1906”. [8] In conclusion the split in opposition to Tsar was important, but was not the major factor. The army supported the Tsar, so there was someone to defend him unlike in 1917 when the army leaders turned against the Tsar. The opposition was divided heavily not just the Left of Russian politics but even the centre parties were divided about the Tsar’s future. The fact was, this mass strike that became a revolt was caused not by a political party unlike in 1917 but a priest who stood against the Tsar, one man versus the dynasty of Russia. The Army’s support was also crucial in the Tsar crushing the revolt and the workers council, but really the opposition had little impact on the fighting that occurred it was more about workers’ rights than anything else whilst in 1917 the Tsar had become head of the army and had given himself a much larger responsibility, and since he had failed in the eyes of the people it became impossible for him to remain in charge. Reference List Source 1 [1] http://socyberty.com/history/the-causes-of-the-1905-russian-revolution/ Source 2 [2] http://www.scribd.com/doc/3679853/Why-Was-There-a-Revolution-in-Russia-in-1905 Source 3 [3] The Russian Revolution 1899-1919, Richard Pipes , Published in 1990 Source 4 [4] http://www.spartacus.schoolnet.co.uk/RUSsunday.htm Source 5 [5] Modern History, By Philip Nichols, Hermione Baines, Richard Davies, Andrew Hall & Mark Seymour Source 6 [6] http://usvetspace.com/essay/15207/how-did-the-tsar-survive-the-1905-revolution/ Source 7 [7] Russian Revolution Daniel Field by, Professor of History, Emeritus, Syracuse University, Stephen P. Frank, Associate Professor of History, UCLA, Abbott Gleason, Barnaby Conrad and Mary Critchï¬eld Keeney Professor of History, Watson Institute for International Studies, Brown University, Patricia Herlihy, Professor of History, Emerita; Professor of International Relations (Research), Watson Institute for International Studies, Brown University, Ronald Grigor Suny Professor of Political Science and History, University of Chicago Source 8[8] History Today, Volume 55 May 2005, Russia 1905 by Beryl Williams ________________ | Page ________________ ...read more.