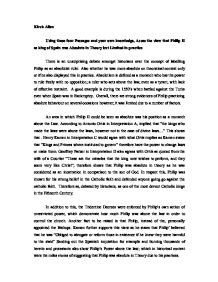 Kirck Allen Using these four Passages and your own knowledge, a***s the view that Philip II as king of Spain was Absolute in Theory but Limited in practice There is an unsurprising debate amongst historians over the concept of labelling Philip as an absolutist ruler. Also whether he was more absolute on theoretical context only or if he also displayed this in practice. Absolutism is defined as a monarch who has the power to rule freely with no opposition; a ruler who acts above the law, even as a tyrant, with lack of effective restraint. A good example is during the 1550's when battled against the Turks even when Spain was in Bankruptcy. Overall, there are strong evidences of Philip practicing absolute behaviour on several occasions however; it was limited due to a number of factors. An area in which Philip II could be seen as absolute was his position as a monarch above the Law. According to Antonio Ortiz in Interpretation A, implied that "the kings who made the laws were above the laws, however not in the case of divine laws..." This shows that . Henry Kamen in Interpretation C would agree with what Ortiz implies as Kamen states that "Kings and Princes where instituted to govern" therefore have the power to change laws or make them. Geoffrey Parker in Interpretation D also agrees with Ortiz as quoted from the wife of a Courtier "These are the miracles that the king now wishes to perform, and they seem very like ...read more.

As argued by Lynch, Philip "never entirely succeeded in overcoming the obstacles of distance involved in governing Spain and to apply decisions over the length and breadth of the country" therefore he could not administer an effective government which limits him in controlling his monarchy. Although this is true to an extent, Philip possessed a strong sense of his personal responsibility for the empire and its people. This also ties in to Kamen's description about Philip's Political theory in which recognizes the Kings duty to "govern to administration to their subjects and to defend them enemies" no matter what the cost. This is agreed by Ortiz as he believed that Philip followed "the privileges and liberties of his kingdom in accordance with oaths he took at the beginning of his reign" therefore he abides by doing the greater good for his country and the state. However Overall, Kamen shows more evidence in terms of Philip's administration in government and political theory than the other sources and he concludes that the idea of Philip as an Absolutist in anyway whether in practice or in theory would should be judged according to the situation of the country as Philip is acting the best way possible for his country. Philip's decision making capabilities are strong evidence of Philip's limitations of practicing absolutism during his reign. Under his direct rule, Spain reached the epoch of its power and influence, expanding its borders through the exploration and colonization of distant territories. ...read more.

However this was still not enough money and the Cortes had to be persuaded to grant the millones tax in 1590. The end result of all this taxation resulted in a tax increase of 430%. Furthermore, Ortiz believed that Philip was "exercising his own complete and unrestricted power over government" which explains how he could manipulate his empire to fix his foreign policy. However, Kamen suggests that "the king avoided any theoretical discussion of his powers" which explains that Philip often acted with a degree of diplomacy and even democracy in foreign policy implementation. An example of this is in 1578, when internal weaknesses within the Portuguese hierarchy led to an opportunity for Spain to take over Portugal. Rather than wage outright war, he preferred 'absolute' strategy, which was to first dispatch ministers to Portugal to garner support for him to be king, and to pay for the release of Portuguese noblemen held in Morocco following the Portuguese-Moroccan war. Overall, In conclusion, Lynch showed the most accurate evidence because it talks a lot about the limitations of his practices as an absolute monarch despite saying little about Philip's royal and divine rights. However, Kamen also creates powerful points about Philip's limited control of his government and decision making, as he had many advisors which influenced him. Overall Both Kamen and Lynch opinions together offers the most realistic debate that Philip was capable however limited in Absolute practices, and that it is more probable to see Philip as an Absolutist in theory due to his limitations. ...read more.