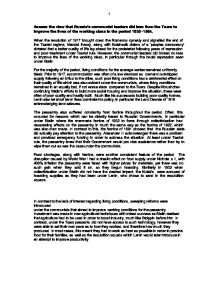 Assess the view that Russias communist leaders did less than the Tsars to improve the lives of the working class in the period 1855-1964.

Assess the view that Russia's communist leaders did less than the Tsars to improve the lives of the working class in the period 1855-1964. When the revolution of 1917 brought down the Romanov dynasty and signalled the end of the Tsarist regime, Marxist theory, along with Bolshevik claims of a 'peoples democracy' dictated that a better quality of life lay ahead for the proletariat following years of repression and poor treatment under Tsarist rule. However, the communist leaders did indeed do less to improve the lives of the working class, in particular through the brutal repression seen under Stalin. For the majority of the period, living conditions for the average worker remained uniformly bleak. Prior to 1917, accommodation was often of a low standard as demand outstripped supply following an influx to the cities, such poor living conditions had a detrimental effect on their quality of life which was also evident under the communists, where living conditions remained in an equally bad, if not worse state compared to the Tsars. Despite Khrushchev continuing Stalin's efforts to build more social housing and improve the situation, these were often of poor quality and hastily built. Much like his successors building poor quality homes, Lenin also let short term fixes dominate his policy, in particular the Land Decree of 1918 acknowledging land seizures. ...read more.

Quality of life was still poor for the urban workers, however in terms of living conditions it was the communists who made the biggest efforts to improve it, despite many of their reforms often being short sighted and temporary. Another common theme throughout the period is the inadequate working conditions the urban workers faced. For all the positive effects of Witte's great spurt, wages remained low and conditions were harsh. Little regard was given towards employee health and safety, and this did not change under the communists. The factories were ruled in an autocratic style similar to the Russian state, and the workers had no rights throughout the tsarist period, as strikes were illegal and trade unions were banned. Despite Nicholas II making concessions and allowing trade unions in 1905, they were once again banned under Lenin in 1920, so the urban workers only benefited from this for a short time. In Tsarist Russia, the workers had to endure 11 hour days, this was initially reduced under the communists. However war communism destroyed much of the initial benefits by imposing military discipline on the workers, and most of the NEP benefits were seen by the peasantry which affected quality of life for the urban workers in much the same way that Stalin's repression in the workplace would later have. ...read more.

This was in order to increase patriotic spirit as the Nazis rapidly closed in on Moscow, not to benefit the urban workers. Civil rights in Russia rarely improved throughout the period, despite occasional breakthroughs such as the October Manifesto, however they took lesser importance to living and working conditions, as it is more important for the urban workers to earn a decent wage and put food on the table, neither of which they were sufficiently able to do under Tsarist or communist rule. On balance, neither Tsarist nor communist regimes had any real effect on improving the quality of life for the urban workers. Individual rulers such as Stalin had a bigger impact than any differences between the two regimes, and despite some improvements such as a better healthcare system, the communists did less than the Tsars to improve the lives of the working class, despite Khrushchev's best efforts towards destalinisation and reform. Such reforms were often ineffective, which is a consistent feature throughout the period. Unlike the Tsarist regime, which ruled under a strong belief in autocracy, the intention of Marxist theory is to prioritise the workers. Given that the urban workers suffered a reduced quality of life under communist rule compared to Tsarist rule, this is a notable failure on the part of the communist governments. ?? ?? ?? ?? 1 ...read more.