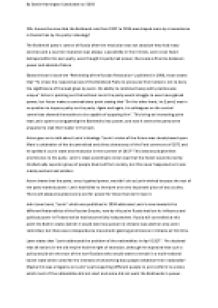 ﻿By Daniel Harrington Candidate no: 5093 15b. Assess the view that the Bolshevik rule from 1917 to 1924 was shaped more by circumstance in Russia than by the party?s ideology? The Bolshevik party?s control of Russia after the revolution was not absolute they had many enemies and a counter revolution was always a possibility in their minds, Lenin even faced betrayal within his own party, even though his party had power, there was a fine line between power and absolute failure. Edward Acton?s book the ?Rethinking of the Russian Revolution? published in 1990, Acton states that ?To stress the responsiveness of the Bolshevik Party to pressures from below is not to deny the significance of the lead given by Lenin. His ability to combine theory with practice was unique? Acton is pointing out that without Lenin the party would struggle to even have gained power, but Acton makes a contradictory point stating that ?On the other hand, he [Lenin] was in no position to impose policy on the party. Again and again, his colleagues on the central committee showed themselves to be capable of opposing him?. ...read more.

When compared with Acton, the points Laver makes are in accord. They held that the party was holding back real change, and that you could view Stalin?s appointment by Lenin as a similar appointment to Kerensky appointing General Kornilov to control the military. Richard Pipes work ?Russia under the Bolshevik Regime 1919-1924? which was published in 1994 goes on to consider the success of Lenin?s policies. Pipes state?s that ?Once it had proven impossible to export communism (Trotsky?s main goal), the Bolsheviks in the 1920s dedicated themselves to constructing a socialist society at home. This endeavour failed as well?. ?Lenin had expected through a combination of expropriations and terror to transform his country in a matter of months into the world?s leading economic power?. What Pipes refers to is the growing disloyalty of once loyal followers but that is common of any government or party that has just gained power throughout the history of politics. Pipes goes onto state ?Lenin had expected the communist party to provide disciplined leadership to the nation: instead he saw political dissent which he had muzzled in the country, resurface within his own party?. ...read more.

the communist manifesto was written in industrialised Manchester it struggled to suggest what an arable based nation could do with Marx?s theory. Stalin?s appointment by Lenin is also a factor turning the nationalities against the Bolsheviks Stalin had his way after Lenin?s constitution was interpreted by Stalin to give him a free pass to crush the different nationalities and oppress those who had been oppressed by the Tsar and the provisional government before hand. The difficulties with communication across the country factors in with education with most people outside the major cities not having the ability to read it meant that the Bolshevik message was limited in a way. The education of the people is also a factor because if people like the surf?s could not read how were they to know what was going on in the country, it left the Bolsheviks with a large problem if the people didn?t understand what they were trying to do then how could they support him. Really the conclusion drawn from the interpretations is one of surprise that no one came along and just overthrew the Bolsheviks not for lack of trying however in history it looks like the Bolsheviks were overthrowing Lenin. ...read more.