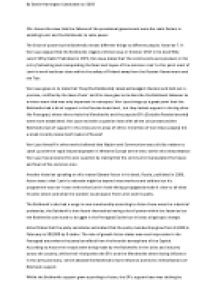 ﻿By Daniel Harrington Candidate no: 5093 15c. Assess the view that the failures of the provisional government were the main factors in enabling Lenin and the Bolsheviks to seize power. The Seize of power by the Bolsheviks means different things to different people, historian T. H. Von Laue argued that the Bolsheviks staged a limited coup in October 1917 in his book Why Lenin? Why Stalin? Published in 1971, Von Laue states that ?the communists were pioneers in the arts of activating and manipulating the fears and hopes of the common man? to this point most of Lenin?s work had been done within the safety of Finland away from the Russian Government and the Tsar. Von Laue goes on to state that ?they (the Bolsheviks) raised extravagant illusions and held out a promise, certified by the laws of war? and Von Laue goes onto describe the Bolshevik takeover as a minor event that was only important in retrospect. Von Laue brings up a great point that the Bolsheviks had a lot of support in the Russian heart land , but they lacked support in the big cities like Petrograd, where there rivals the Mensheviks and the popular SR?s (Socialist Revolutionaries) were more established. Von Laue end with a question how with all the circumstances (the Bolsheviks lack of support in the cities and in areas of ethnic minorities of non-Slavic people) ...read more.

Though both Acton & Von Laue agree on one thing, that the Bolshevik Manifesto directly recognised the struggle of the people and offered solutions the people wanted to hear. Like end starvation, reform the factories. The reality was that the cold and anarchy played an important part in the Bolsheviks taking power despite how big or small the party was. The next interpretation for Orlando Figes in the book ?A People?s Tragedy: The Russian Revolution, 1893-1924?, published in 1996. Figes brings emphasis to the Kornilov crisis and the role that the Bolsheviks played within the crisis. Figes states that the Bolsheviks would not have gained power without the Kornilov crisis. The fact that many political prisoners were released after this crisis helped the Bolsheviks, because of their key role in resolving the situation. Kornilov was appointed by Kerensky, the leader of the provisional government at the time. The Kornilov Crisis started with an appointed general of the Russian army(Kornilov) turning on the government; Kornilov was appointed by the provisional government and would go on to run parts of the army. Kornilov revolted against the government and got his troops to turn their guns at Petrograd and planned to storm the parliament in order to end the anarchy that was happening at the time. When the provisional government learned of these plans they faced a dire situation because who would protect the city of Petrograd from the ...read more.

Acton writing 19 years previously had claimed that Party membership had been a reason of the Bolshevik take over but Acton does not mention this in his work with Stableford. One thing that Figes Acton & Stableford all have in common is that they don?t see the Bolshevik take over as a minor event and therefore they all disagree with Von Laue. Von Laue?s ending question ?How did a small minority take over Russia?? Is answered, in that the Bolshevik leadership may have been a small number of people but they had millions of people supporting their cause. That is by no means a small minority. Von Laue does answer his own question though in his opening line ?the communists were pioneers in the arts of activating and manipulating the fears and hopes of the common man? In conclusion the Bolshevik?s took power because of a number of failures but also because of their own decisions to stay out of government unlike their rivals to Menshevik?s. The Provisional government failed because of Kornilov and Kerensky?s appointment of Kornilov into a high ranker military position, the fact that the Bolshevik?s saved the government and the people which made them Martyrs and heroes to the people and that by the end no matter what Kerensky or the government did people still suffered and the Bolshevik?s adapted to the changing situation in Russia. ...read more.