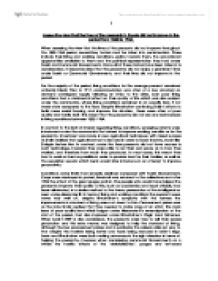 Assess the view that the lives of the peasants in Russia did not improve in the period from 1855 to 1964.

Assess the view that the lives of the peasants in Russia did not improve in the period from 1855 to 1964. When assessing the view that the lives of the peasants did not improve throughout the 1855-1964 period, several key factors must be taken into consideration. These include their living and working conditions, policy towards them, the educational opportunities available to them and the political representation they had under Tsarist and Communist Governments. Once all of these factors have been taken into consideration, it becomes clear that the peasantry did not enjoy a prominent time under Tsarist or Communist Governments, and their lives did not improve in the period. For the majority of the period, living conditions for the average peasant remained uniformly bleak. Prior to 1917, accommodation was often of a low standard as demand outstripped supply following an influx to the cities, such poor living conditions had a detrimental effect on their quality of life which was also evident under the communists, where living conditions remained in an equally bad, if not worse state compared to the Tsars. Despite Khrushchev continuing Stalin's efforts to build more social housing and improve the situation, these were often of poor quality and hastily built. This meant that the peasantry did not see any real increase in living conditions between 1855-1964. In contrast to the lack of interest regarding living conditions, sweeping reforms were introduced under the communists that aimed to improve working conditions for the peasantry. ...read more.

Often, this occurred for reasons which can be directly traced to Russian Governments, in particular under Stalin where the manmade famine of 1932 to force through collectivisation had devastating effects on the peasantry in much the same way as the famine of 1922, which was also man made. In contrast to this, the famine of 1891 showed that the Russian state did actually pay attention to the peasantry, Alexander III acknowledged there was a problem and provided emergency funding in order to address the situation. Despite the peasantry receiving help from the Government pre 1917, the detrimental effects of communist rule again wiped out any improvement in their quality of life. Russian rulers throughout the period shared a common goal, to industrialise. When passing the Emancipation Act, Alexander II held a view shared by anti serfdom critics that a modern state with developed agriculture and industry was the way forward. A similar desire was held by Stalin in introducing collectivisation, and also by Stolypin in abolishing the Mir in the hope of creating a new, enterprising class of peasant. Boosting agriculture was key to this so one would assume that the peasantry would benefit from agricultural reforms. However, this was not the case. Despite its importance, agriculture was always second fiddle to industry in much the same way that the peasantry were a second class citizen. As reforms were introduced, their voice was repeatedly neglected in order for the Russian state to achieve its shared common goal to industrialise and compare with the West. ...read more.

This had effectively undone the work of Lenin where peasant farms had been more equal than at any point under the crown, even when Stolypin was reforming, and the achievements of the peasantry who had achieved ambition and land, despite requisitioning and taxation from the state, was taken away by the introduction of the Kolkhoz. Despite heavy repression and persecution under the Mir, and poor treatment under the land captains, this is nothing in comparison to Stalin's forced collectivisation. The greatest change to all of Russia had taken place with an unprecedented level of violence, fear and disruption, which meant that the lives of the peasantry did not improve in the 1855-1964 period in terms of freedom. Alexander II could never really create a free peasantry and Nicholas II did little following Stolypin's assassination and still heavily restricted political freedom despite the introduction of the Duma. Despite Lenin's best efforts, Stalin's obliteration of the peasantry undone most of this work. In conclusion, the peasantry were poorly treated by both Tsarist and Communist Governments in the 1855-1964 period which meant that their lives did not improve. Following the Emancipation Act, the peasantry had to endure among other things, high taxation, requisition, repression and restriction on movement and poor quality land. Both regimes treated the peasantry with disdain and despite some benefits such as initially seen under war communism, and also Stolypin, ultimately the lives of the peasantry did not improve in the 1855-1964 period. ?? ?? ?? ?? 1 ...read more.

This response considers many aspects of peasants' lives and is analytical throughout, with good understanding shown. However, it is general in places without enough detail in the evidence to help support points. 4 out of 5 stars.