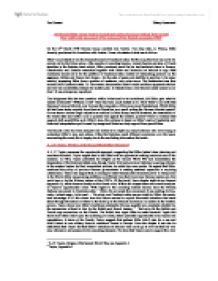 'At Munich Hitler gained what he wanted and achieved conquest without firing a shot' How valid is this assessment of the outcome of the Munich agreement, 1938?

'At Munich Hitler gained what he wanted and achieved conquest without firing a shot' How valid is this assessment of the outcome of the Munich agreement, 1938? On the 12th March 1938 German troops marched into Austria. Two days later, in Vienna, Hitler formally proclaimed his Anschluss with Austria. It was a foretaste of what was to follow. Hitler's next objective was the dismemberment of Czechoslovakia. But the coup this time was not to be carried out by the Fuhrer alone. After months of mounting tension, violent disorder and tales of Czech atrocities in the Sudeten lands which, Hitler promised would be his last territorial claim in Europe, Chamberlain and Daladier assembled together with Hitler and Mussolini at Munich to sign what eventually turned out to be the partition of Czechoslovakia. Instead of intensifying pressure on the aggressor, Britain and France had chosen - for the sake of peace and stability to sacrifice 'a far away country' appeasing Hitler from a position of weakness, not a wise move. The Sudetenland was thus severed from Czechoslovakia. To The western democracies Hitler's racial ambitions appeared satisfied and war was comfortably delayed for another year. In Chamberlains view Munich meant 'peace in our time'. It was a temporary expedient. The assignment title has two questions within it that need to be considered; did Hitler gain what he wanted at Munich? -Without a war? There has been much debate as to Adolf Hitler's and with that Germany's aims at Munich, was it simply the occupation of the once owned Sudetenland, Which Hitler felt had been stolen unjustly from them at Versailles, as a result uniting the German blooded people? Or was there a sinister larger objective as outlined in Mein Kampf and at Hossbach, the destruction of the Czech state and further more a possible war against the western powers? There is evidence that supports both possibilities as to Hitler's aims, the evidence is based on Hitler's style of leadership and historical interpretations put forward by recognised Historians help support these possibilities. ...read more.

The source suggests Hitler reasons for this are based on the treatment of the Sudeten Germans. However with this obvious threat to the Czech state it can be gathered from the source that Hitler still at this point had not written off a diplomatic solution to the problem, 17 'Hitler did not want an early breakdown', this means a breakdown to the negotiations and could be seen as Hitler trying to avoid war thus fitting Taylor's and Bullock's interpretations of Adolf Hitler's aims, that destruction of the Czech state was a key objective, but only the threat of war was there liking to Taylor's case or as Bullock suggests, leaving a door open for a possible peaceful/diplomatic conclusion. Source E Part (a) Hitler made a speech at the Sportspalast on the 26th September, this source is an extract taken from that speech. The source clearly suggests that the demands made over Czechoslovakia would be Hitler's last. In his speech Hitler explains that once the Sudeten land/territory is surrendered to German control then Germany would be content and peace would be prevalent. There is therefore close relation between this source and Taylor's view, the suggestion that Hitler and with that Germany did not want war with Czechoslovakia but the use of threat of war and intimidation was a key factor in achieving German Foreign policy aims. Although this source is useful in understanding what Hitler fundamentally wanted from Munich it is only a small extract from the speech and therefore does not give a full account and could be missing vital information. Part (b) The latter half of this source is that of a reaction of a British man, Sir Robert Bruce Lockhart. The diary entry comes from 26th September and is a reaction to Hitler's speech at the German Sportspalast. The diarist can see war with the western powers as a certainty in the not too distant future, he suggests the only method of avoidance would be if Britain and France were to back ...read more.