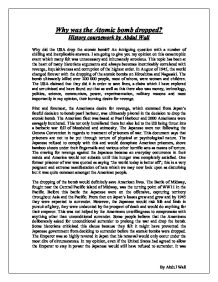 Why was the Atomic bomb dropped? History coursework by Abdul Wali Why did the USA drop the atomic bomb? An intriguing question with a number of chilling and inexplicable answers. I am going to give you my opinion on this catastrophic event which many felt was unnecessary and inhumanely atrocious. This topic has been at the heart of many historians arguments and always becomes inextricably correlated with revenge, inquisitiveness and corruption of the highest order. In August of 1945, the world changed forever with the dropping of the atomic bombs on Hiroshima and Nagasaki. The bomb ultimately killed over 200 000 people, most of whom, were women and children. The USA claimed that they did it in order to save lives, a claim which I have explored and scrutinised and have found out that as well as this there also was money, technology, politics, science, communism, power, experimentation, military reasons and most importantly in my opinion, their burning desire for revenge. First and foremost, the Americans desire for revenge, which stemmed from Japan's fateful decision to bomb pearl harbour, was ultimately pivotal in the decision to drop the atomic bomb. The American fleet was based at Pearl Harbour and 2000 Americans were savagely butchered. ...read more.

By intimidating Russia, all these goals could be realized. It's quite apparent that Truman and Roosevelt felt no compassion for human life, having dropped the bomb on Hiroshima and Nagasaki simply to overawe Russia. Truman said that when the bomb was dropped he'll 'certainly have a hammer on those boys'. By those boys he is referring to the Soviets and this quote provides use with further evidence that Japan were only pawns in his game with the USSR. Nonetheless, instead of the desired effect that the United States had wished for, the Russians responded more hostilely and thus the Cold War began. As cold-blooded as it may seem, the USA also wanted to experiment on the Japanese. An atomic bomb had never been dropped before and the thrill of experimentation overcame their compassion for human life. If the bomb was successful they would cement their place in history and the notion of their supremacy would never cease to exist. They wanted to discover the full power of the bomb and to demonstrate that their capitalist technology is far more advanced than that of communism. The Americans dropped the bomb at the time of rush-hour when most people were exposed and vulnerable. ...read more.

While the sequence of events preceding that fateful summer morning of August 6,1945 are fully understood, the motives behind Truman's actions are shrouded in ambiguity. Top military officials publicly denounced the use of such a horrendous weapon, while the obvious advantages to the bomb, American's argue, was a shortened Pacific War. Paradoxical views between traditional American beliefs and historic theories suggest that the issue is still very much unresolved. The lives of millions were shattered in a few seconds as the bombs demolished their homes and murdered their family members. Never has one incident in history affected such a great number of people for so many years. But the question remains: Why did Truman drop the atomic bomb? Truman's decision to drop the atomic bomb was clearly not a military necessity because land invasion casualties were much lower than perceived and the Japanese had all but surrendered. I believe that revenge is the most important factor in the dropping of the bomb as revenge is an inexplicable emotion that inexorably leads to the destruction of either the avenger or the avenged. Many people have gone as far as saying it is an act of infamous and inexcusable terrorism. The pilot who unleashed the bomb sums it up in one chilling and deeply moving conclusion 'what have I done'? . ?? ?? ?? ?? By Abdul Wali ...read more.