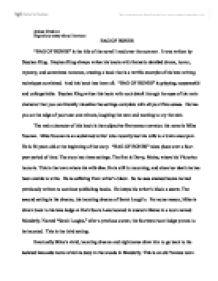 &quot;Bag of bones&quot; is the title of the novel I read over the summer. It was written by Stephen King.

Joshua Gendron Expository essay about literature BAG OF BONES "BAG OF BONES" is the title of the novel I read over the summer. It was written by Stephen King. Stephen King always writes his books with fantastic detailed drama, horror, mystery, and sometimes romance, creating a book that is a terrific example of his best writing techniques combined. And this book has them all. "BAG OF BONES" is gripping, suspenseful and unforgettable. Stephen King writes this book with such detail through the eyes of his main character that you can literally visualize the settings complete with all your five senses. He has you on the edge of your seat one-minute, laughing the next and wanting to cry the next. The main character of this book is the subjective first-person narrator; his name is Mike Noonan. Mike Noonan is an acclaimed writer who recently lost his wife to a brain aneurysm. He is 36 years old at the beginning of the story. ...read more.

The statement that follows, exactly as Stephen King has written it on page 360 of the book, shows one example of symbolism: "But Kyra wouldn't. She was the hood ornament in all of this; doomed to go wherever the car took her" (pg360). Kyra is symbolizing a prize. He uses other symbolism also. In his dreams there are three very large sunflowers as he says "with faces like search lights." Through his dreams he foreshadows what is going to happen when he goes to the lake house, Sarah Laughs. These dreams are filled with hauntings and terror. And they become more and more vivid. Each time he has the dream he reveals a little more. Both Mike Noonan and Max Devore are millionaires; they battle for custody through court, and Mattie and Mike win the case. This is kind of the subplot to the story. In the meantime, Mike is being mysteriously haunted through his dreams by Sarah, the owner of the lodge named after her at the beginning of the century, who was gruesomely raped and murdered by Max Devore's father and other town members fathers. ...read more.

It is mysterious, scary, mesmerizing, suspenseful, and contains a bit of a love story as well. Stephen King did a great job with this book, it was as if everything finally found a place in the jigsaw puzzle in the end, and a deep understanding overcomes you. I thought most of the story could be related to a true-life experience, except for a supernatural twist, it's Stephen King after all. He also bounces back and forth through dream and reality and even through time. This book is 732-pages long; it took me a couple of weeks to read it, not being a huge book fan, that says quite a bit, just the fact that I finished it says a lot. I would recommend this book to anyone of high school reading level and above. If it kept my attention, it can keep anyone's, and it sure made me think. But I will say, being a King book, it does contains a few very strong mature themes, so those who may be offended don't read it...or go against your morals and read it anyway, because you will enjoy it. ...read more.