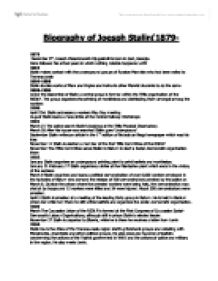 Biography of Joesph Stalin(1879- 1879 December 9th, Joseph Vissarionovich Djugashvili is born in Gori, Georgia. Here followed his school years in which nothing notable happened until: 1895 Stalin makes contact with the underground groups of Russian Marxists who had been exiled to Transcaucasia 1896-1898 Stalin studies works of Marx and Engles and instructs other Marxist students to do the same 1898-1900 Under the leadership of Stalin a central group is formed within the Tiflis organization of the RSDLP. The group organizes the printing of manifestos and distributing them amongst among the workers 1900 April 23rd Stalin addresses a workers May Day meeting August Stalin leads a mass strike at the Central Railway Workshops 1901 March 21 The police search Stalin's lodgings at the Tiflis Physical Observatory. March 28 After his house was searched Stalin goes 'Underground' September Stalin writes an article in the 1st edition of Brdzola an illegal newspaper which was his idea November 11 Stalin is elected a member of the first Tiflis Committee of the RSDLP November The Tiflis ...read more.

1907 Stalin becomes editor of a legal newspaper, and continues with his many public speeches and manifestos. 1908 February The Baku Committee of the RSDLP, directed by Stalin, organizes a "Self-Defence Staff" because of the growing frequency of assaults. Stalin also organises a number of large strikes March 25th Staling is arrested and held in Bailov prison November 9th Stalin is deported to Vologda Gubernia for 2 years 1909 June 4th Stalin escaped exile and returns to Baku to lead the Bolshevik party there. 1910 Stalin is arrested and exiled to Solvychegodsk where he makes contact with Lenin 1911 Stalins exile is over but he is not allowed to go to the capital or any major industrial areas. He decides to go to Vologda but later secretly moves to St. Petersburg where he makes contact with the Bolshevik party but then is arrested and exiled to Vologda for 3 years 1912 Stalin is elected a member of the central committee of the Bolshevik party and later escapes exile and move to St. ...read more.

Stalin is appointed to get the transport system working and to get food to the north for the war. October 8 By decision of the Council of People's Commissars Stalin is appointed a member of the Revolutionary Military Council of the Republic. 1919 Stalin toured the various military fronts during the civil war as a 'politico-military leader' also In 1919 he married Nadezhda Alliluyeva, who later committed suicide in 1932. 1920 Stalin Is elected to the Ninth Congress of the RCP(B). Also he is appointed to produce reports on the many problems of the army including clothing and supply problems. He is still having articles published on a regular basis. 1921 Stalin and Lenin edit the thesis "the national question" to be presented t the tenth congress of the RCP (B). 1922 Pravda has its tenth anniversary. The 11th and 12th of the RCP (B) elect Stalin as part of its presidium. Staling proposes a union of all the soviet states i.e. RSFSR, the Ukrainian S.S.R., the Byelorussian S.S.R. and the Transcaucasian Federation. They form the USSR ...read more.