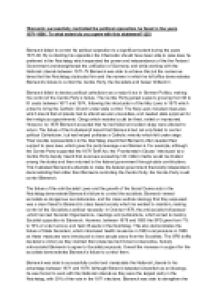 Bismarck successfully controlled the political opposition he faced in the years 1871-1890. To what extent do you agree with this statement?

Ã¯Â»Â¿â€˜Bismarck successfully controlled the political opposition he faced in the years 1871-1890.â€™ To what extent do you agree with this statement? (25) Bismarck failed to control his political opposition to a significant extent during the years 1871-90. By controlling his opposition the Chancellor should have been able to pass laws he preferred in the Reichstag which expanded the power and independence of the the Federal Government and strengthened the unification of Germany, and while working with the National Liberals between 1871-79 Bismarck was able to achieve this,but the numerous times that the Reichstag obstructed him and the manner in which he left office demonstrates Bismarckâ€™s failure to control the Centre Party, the Socialists and Kaiser Wilhelm II.[a] Bismarck failed to destroy political catholicism as a major force in German Politics, making his control of the Centre Party a failure[b]. The Centre Party gained support, growing from 58 to 91 seats between 1871 and 1874, following the introduction of the May Laws in 1873 which aimed to bring the Catholic Church under state control. ...read more.

However, between 1878 and 1890 the SPD grew from 7% to 19% of voter turnout, and held 35 seats in the Reichstag. This also demonstrates the failure of State Socialism, which introduced health insurance in 1883 and pensions in 1889 as these measures were introduced to draw people away from the Socialists. The SPD deftly declared a victory as they claimed their presence had forced conservative, fiercely anti-socialist Bismarck to agree to Socialist proposals. Overall the increase in support for the socialists demonstrates Bismarckâ€™s failure to control them[e]. Bismarck was able to successfully control and manipulate the National Liberals to his advantage between 1871 and 1879. Although Bimarck detested Liberalism as an ideology, he was forced to work with the National Liberals as they were the largest party in the Reichstag, with 30% of the vote in the 1871 elections. Bismarck was able to strengthen the unification of Germany with the Liberals through creating the central bank and the Gold Mark, as well as abolishing Internal Tariffs through laws passed by the Reichstag with Liberal Support. ...read more.

In conclusion, Bismarck failed to control the Socialists, which grew in strength during 1871-90, failed to control the Centre Party, which defeated Bismarck over the Kulturkampf and the Federal Budget, and the new Kaiser Wilhelm II, who dismissed him as Bismarck grew increasingly out of touch with modern, industrialising Germany. As a result, despite his success in not only controlling but exploiting the National Liberals during 1871-79, his failure with other opposition groups made Bismarck a weaker Chancellor, therefore he didnâ€™t control the political opposition he faced to a significant extent. [a]really well set up -> perhaps your first sentence could have reflected the points you make about time? i.e. yes in the 70s, no in the 80s? [b]clear point but could be more nuanced -> to what degree? [c]well-argued and supported with evidence but hat about his alliance with them in the 1880s? [d]again, to what degree? [e]were they ever in a position to pose serious opposition to him politically? what does 'control' mean? [f]well argued throughout the whole timeframe [g]well argued ...read more.