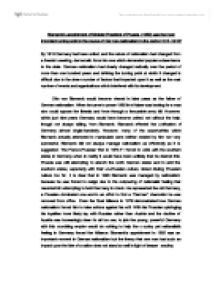 Bismarcks appointment of Minister President of Prussia (1862) was the most important turning point in the course of German nationalism in the period 1815-1919?

Bismarck's appointment of Minister President of Prussia (1862) was the most important turning point in the course of German nationalism in the period 1815-1919? By 1919 Germany had been united, and the nature of nationalism had changed from a freedom seeking, democratic force into one which demanded popular subservience to the state. German nationalism had clearly changed radically over the period of more than one hundred years and defining the turning point at which it changed is difficult due to the sheer number of factors that impacted upon it as well as the vast number of events and organisations which interfered with its development. Otto von Bismarck would become viewed in later years as the father of German nationalism. When he came to power 1862 the Kaiser was looking for a man who could oppose the liberals and force through a favourable army bill. However, within just nine years Germany would have become united, not without the help, though not always willing, from Bismarck. Bismarck effected the unification of Germany almost single-handedly. However, many of the opportunities which Bismarck actually attempted to manipulate were neither created by him nor very successful. ...read more.

It also struck a double blow in this respect. It not only made a Prussian-led Germany more likely but it made an Austrian-led Germany less likely. Because of her exclusion from the customs union the Austrian economy suffered and her already fragile market became on step closer to failing and this would be one of the major reasons for her defeat to Prussia. The use of the economy mirrored the nature of German nationalism; initially it was a liberal move, the reduction of trade barriers embodied by the introduction of the Zollverein. However, by the time unification was achieved economic policy turned its back on liberalism and the economic protectionism Bismarck employed against Russia helped show how far nationalism had changed. The Zollverein would form the template upon which the German Empire would eventually be founded, a kleindeutsch dominated by Prussia. Some historians even go so far to view the whole of the unification of Germany as purely an economic transaction, that it was not driven by political ideology but by the cold logic of money and economic expansionism. The Zollverein did represent an important twist in the history of German nationalism but it did not utterly change the face of the ideology but simply made the prospect more likely. ...read more.

It would be easy to say that it was a simple political humiliation for the French to have their enemies declare their new country in the French capital but to do this would ignore the deeper significance of both the time and place it was made. Nationalism within Germany underwent many changes over the period from 1815 to 1919. It suffered from a gradual change from its ideals over the time and it is difficult to differentiate between the impacts that the different potential turning points had on German nationalism. However, the most seminal moment in the history Germany nationalism was when it shifted indelibly from the idealists' views to the pragmatic views of the industrialists within the country. 1866 can be seen as the turning point in the unification of Germany rather than a turning point in the nature of German nationalism. The failure of democracy in 1848 at a time when many other revolutions had succeeded left many Germans with the view that it would only be through violence and warfare "blood and iron" that their dreams would ever be realised. ?? ?? ?? ?? ...read more.