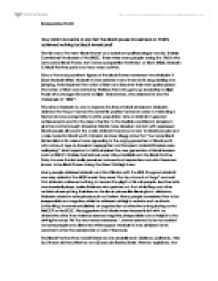 How far is it accurate to say that the black power movements of 1960's achieved nothing for black Americans? The first use of the term "Black Power" as a social and political slogan was by Stokely Carmichael the leader of the SNCC. There were many people during the 1960's who advocated Black Power, from famous people like the Nation of Islam (NOI), Malcolm X, Black Panther party and many more activists. One of the most prominent figures of the black Power movement was Malcolm X (born Malcolm little) .Malcolm X was arrested many times for his drug dealing and pimping, he later joined the nation of Islam and became their main spokes person. The nation of Islam was started by Wallace Fard who gave up leadership to Elijah Poole who changed his name to Elijah Mohammad, who claimed he was the messenger of "Allah". The aims of Malcolm X, was to improve the lives of black Americans. ...read more.

His suggestions that blacks were frequently left with no alternative other than violence seemed negative, irresponsible and unhelpful to the civil rights cause. His "by any means necessary ", stance seemed to be too radical for some people and alienated white support. Malcolm X was criticized for his comments after the assassination of John F Kennedy. The Black Panther Party for Self Defence was established in Oakland, California, 1966 by 24 year old Heuy Newton and 30 year old Bobby Seale. Newton explained, that they chose the Panther symbol because the panther "Never attacks, but if anyone attacks him or backs him into a corner the panther comes up to wipe the aggressor or the attacker out". The Black Panther party boasted more than 5000 members and 30 chapters. The Black Panthers won a lot of respect in the ghettos where they set up clinics to advise on health, welfare and legal rights. In 1970 the southern California chapter served up to 1700 meals weekly to the ghetto poor. ...read more.