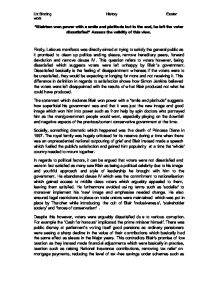 Blairism won power with a smile and platitude but in the end, he left the voter dissatisfied Assess the validity of this view.

"Blairism won power with a smile and platitude but in the end, he left the voter dissatisfied" Assess the validity of this view. Firstly, Labours manifesto was directly aimed at trying to satisfy the general public as it promised to clean up politics ending sleaze, remove hereditary peers, forward devolution and remove clause IV. This question refers to voters however, being dissatisfied which suggests voters were left unhappy by Blair's government. Dissatisfied basically is the feeling of disappointment whereas if the voters were to be unsatisfied, they would be expecting or longing for more and not receiving it. This difference in definition in regards to satisfaction shows how Simon Jenkins believed the voters were left disappointed with the results of what Blair produced not what he could have produced. The statement which declares Blair won power with a "smile and platitude" suggests how superficial his government was and that it was just the new image and good image which won him into power such as from help by spin doctors who portrayed him as the man/government people would want, especially playing on the downfall and negative aspects of the previous/current conservative government at the time. Socially, something dramatic which happened was the death of Princess Diana in 1997. The royal family was hugely criticised for its reserve during a time when there was an unprecedented national outpouring of grief and Blair instead made a speech which fuelled the public's satisfaction and gained him popularity at a time the 'whole' country needed to mourn together. ...read more.

Labour fulfilled its manifesto promise to the voters with the Good Friday Agreement, leaving them satisfied that social problems in Ireland would no longer be a threat and worry for the British public; the British voters. In contrast, something Blair is most famously remembered for is the negative move of Iraq- "The war on Terror" which became the single biggest problem in all of his 10 years in office. Andrew Marr even stated that "Many see this war as the single worst mistake made by a British government in 60 years". Blair's government was accused of indiscriminate bombing in Iraq and there was information from Iraqi exiles which encouraged fears of the threat Saddam might represent to the west; the biggest fear was that Iraq might develop WMD. Blair quoted from a dossier, the 'dodgy dossier, which claimed to have evidence that Saddam's WPD programme was "active, detailed and growing" which provided the justification for invading Iraq. The controversy over the 'Iraq Dossier' was mentioned frequently in the government's conflict with the BBC over the claim in the 'September Dossier' that Iraq could deploy biological weapons within 45 minutes of an order to do so, and the controversy surrounding the death of Doctor David Kelly. The claims contained in the 'September' and 'Iraq' Dossiers were called into question when weapons of mass destruction were not found in Iraq, and the dossiers were encompassed by House of Commons Foreign Affairs Select Committee inquiry. ...read more.

This major economic misjudgement left various voters dissatisfied and Blair's Smile and platitude didn't make this mistake seem better especially considering the media, such as The Scotsman newspaper, referred to it as 'Brown's disastrous foray into international asset management'. Essentially, the whole thing lost Britain money and caused long standing damage to the financial system. Overall, the Labour government's 1997 Manifesto said they would clean up politics and end sleaze, which did not happen for example the cash for honours. Though they said "We will take effective measures to combat the terrorist threat." They were not effective and made the situation worse if anything which led to Blair's biggest mistake in regards to Iraq. Although, they did satisfy voters when they fulfilled their manifesto pledge for Northern Ireland saying "Labour will help build trust and confidence among both Nationalist and Unionist traditions in Northern Ireland by acting to guarantee human rights, strengthen confidence in policing, combat discrimination at work and reduce tensions over parades." Blair done a lot of things which arguably dissatisfied the voters which have been explored through this essay which does make it seem that it was just his youthful image, smile and platitude which put him in power however there were times that many voters were arguably satisfied and more so perhaps happy with what he 'achieved'. ?? ?? ?? ?? Liz Binding History Easter work ...read more.