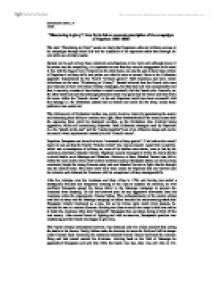 &quot;Blundering to glory&quot;. How far is this an accurate description of the campaigns of Napoleon 1800-1809?

"Blundering to glory". How far is this an accurate description of the campaigns of Napoleon 1800-1809? The term "Blundering to Glory" seems to imply that Napoleon achieved military success in his campaigns through sheer luck and the ineptitude of his opponents rather than through his own skills as a military leader. Barnett can be said to have been extremely anti-Napoleon in his views and although many of his points may be compelling, it is important to note that they may be exaggerated to be more in line with his biased view. Connelly on the other hand, can also be said to have been critical of Napoleon's military skills and points out what he sees as several flaws in the Guibertian approach implemented by the French "military genius". Both historians also have varied definitions on the term "Blundering to Victory". Barnett believed that the French side were just fortunate to have won those military campaigns, but that that luck was unsustainable and that it was only a matter of time before it would eventually fail the French side. Connelly, on the other hand had said that although potentially there was great risk for failure and that errors did occur within the "Grande Armee", in the end Napoleon could have been successful with this strategy i.e. the Guibertian system had its defects and could fail the army, unless those problems were sorted out. ...read more.

With no Russian reinforcements nearby, Mack surrendered his 27,000 men. Austria was effectively out of the war. However, as Correlli and Barnett have pointed out, it may have been an entirely different outcome had General Mack decided to break out as Melas had done at Marengo, or if the Russians had tried to help Mack rather than retreat. Bonaparte may have faced the possibility of fighting an enemy at two fronts and this could have resulted in the defeat of his army. It may have been seen as pure luck by Barnett that the Russians had decided to retreat instead of facing the "Grande Armee". Regarded as Napoleon's greatest victory, Austerlitz was an outstanding trap that destroyed the Austro-Russian army opposing him. It can be argued that Austerlitz was the finest example of Bonaparte's tactical strategy as, by tricking his opponents into thinking he was weaker than he actually was, and then calling in nearby reinforcements, Bonaparte initially met the combined Allied army of 85,400 men and with just 73,100 men. The French emperor deliberately abandoned a strong central position and left his right flank weak in order to lure the enemy to approach there. The Allies readily moved forward off the Pratzen Heights and this could be said to have been a fatal mistake as they had then weakened the centre of their army in order to try and defeat the French right. ...read more.

Archduke Charles made the mistake of believing that Bonaparte was really interested in peace with the Austrians - in fact, it was a ploy to build time for the French to build-up their strength and attack the Austrian force again. "You engage, and then you wait and see" - so Napoleon Bonaparte considered his ability of war. He was described as a scrambler who never had a plan, strategic or tactical, that did not break down or change of necessity in the field. He was so confident of his ability to improvise, cover his own mistakes, and capitalize on those of the enemies that he repeatedly plunged his armies into uncertain, seemingly desperate situations, only to emerge victorious, "blundering to glory". However, it can also be said that there were Allied errors made as well as errors made on the French side; and that as mistakes were made, the French had also learned from them (e.g. in the battle of Aspern-Essling). The biggest factor, especially from the viewpoint of Connelly, was the element of risk involved in Bonaparte's military campaign. If an enemy had adapted to his idea of Guibertian warfare or fought with a substantial military force, Bonaparte could have been forced to change his tactics and, could possibly have been defeated. Therefore, it may have been a combination of luck, through Allied mistakes, the strict discipline of the "Grande Armee" and the exceptional military command displayed by Bonaparte that helped in his campaigns during the "years of legend". SHAMIMA SHALLY 13ZB ...read more.