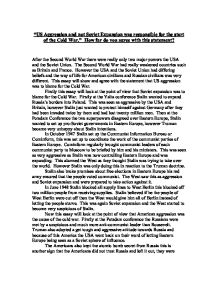 "US Aggression and not Soviet Expansion was responsible for the start of the Cold War." How far do you agree with this statement? After the Second World War there were really only two major powers the USA and the Soviet Union. The Second World War had really weakened countries such as Britain and France. However the USA and the Soviet Union had differing beliefs and the way of life for American civilians and Russian civilians was very different. This essay will show and agree with the statement that US aggression was to blame for the Cold War. Firstly this essay will look at the point of view that Soviet expansion was to blame for the Cold War. Firstly at the Yalta conference Stalin wanted to expand Russia's borders into Poland. This was seen as aggressive by the USA and Britain, however Stalin just wanted to protect himself against Germany after they had been invaded twice by them and had lost twenty million men. ...read more.

Stalin believed if he the people of West Berlin were cut off then the West would give him all of Berlin instead of letting the people starve. This was again Soviet expansion and the West started to become very suspicious of Stalin. Now this essay will look at the point of view that American aggression was the cause of the cold war. Firstly at the Potsdam conference the Russians were met by a suspicious and much more anti-communist leader than Roosevelt. Truman also adopted a get tough and aggressive attitude towards Russia and because of this America the USA went back on their word of letting Eastern Europe being seen as a Soviet sphere of influence. The Americans also kept the atomic b**b secret from Russia this is another sign that the Americans did not trust Russia and left it out, they were causing a feeling of doubt in Russia's mind, the Russians probably thought the reason they are keeping this secret is because they want to use it on us. ...read more.

This is exactly how the Russians viewed this and became more and more afraid and suspicious of the USA. In 1949 the Western powers met in Washington and signed and agreement to work together. The new organization was called NATO (North Atlantic Treaty Organisation). This was another form of USA aggression and was sending a message to the USSR, it was basically saying if you try and take over anyone of these countries you will be met by the force of the rest. This treaty had now split the world in two, the USA and its allies and Russia and its allies. In conclusion this essay shows that US aggression and not Soviet expansion was the cause of the cold war. Both sides were to blame as they were too suspicious of each other to work out their differences and both were as aggressive as each other. However it was US aggression that started it all off. At the Potsdam conference Truman showed his aggressive attitude and by adopting his get tough attitude and announcing the Truman Doctrine started off a spiral of hatred, fear and suspiciousness between the countries. ...read more.