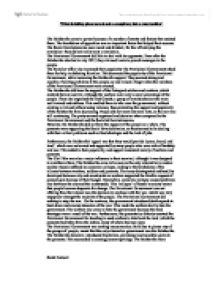 This added to their popularity, and support consisted mainly of workers and peasants. The Civil War was also a major influence in their survival, although it was designed to overthrow them. The Bolsheviks came to be seen as the only alternative to restore society. Russia suffered an economic collapse, leading to the breakdown of the alliance between workers, soldiers and peasants. The army disintegrated and hostility developed between city and countryside as workers supported the forcible request of peasant gain because of their hunger. Meanwhile, economic collapse caused problems also between the city and the countryside. This 'collapse' of Russia's society meant that people became desperate for change. The Provisional Government was not offering this; their stance was the decision to continue with the war, which was very unpopular amongst the majority of the people. ...read more.

They managed this by getting rid of their opponents through strategic planning and by taking power at the right moment- when their opponents lacked any support or power. With regard to the Provisional Government, if the government had offered solutions to unrest and the existing problems, there would have been more competition and possibly many people would have supported them, instead of the Bolsheviks. However, the Bolsheviks promised to provide the basic needs of the people, which would benefit nearly every social group. The Bolsheviks were organised in times of uprising and war, and were a good solution for many soldiers, workers and peasants. Therefore while it is clear that different factors enabled the Bolsheviks to take power, their determined attitude and important and strategic planning relating to the events at that time, meant that they could in the end, take control in a calm, organised manner. 'What is taking place here is not a conspiracy but a resurrection' Sarah Fretwell ...read more.