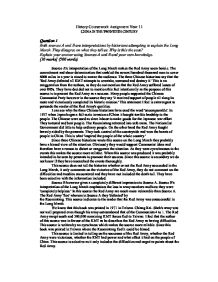 Both sources A and B are interpretations by historians attempting to explain the Long March - They disagree on what they tell us. Why is this the case?

History Coursework Assignment Year 11 CHINA IN THE TWENTIETH CENTURY Question 1 Both sources A and B are interpretations by historians attempting to explain the Long March. They disagree on what they tell us. Why is this the case? Explain your answer using Sources A and B and your own knowledge. [10 marks] (500 words) Source A's interpretation of the Long March makes the Red Army seem heroic. The commitment and sheer determination that enabled the several hundred thousand men to cover 6000 miles in a year is aimed to amaze the audience. The three Chinese historians say that the 'Red Army defeated all KMT attempts to overtake, surround and destroy it.' This is an exaggeration from the authors, as they do not mention that the Red Army suffered losses of over 80%. They have decided not to mention this fact intentionally as the purpose of this source is to present the Red Army as a success. Many people supported the Chinese Communist Party however in the source they say 'it received support of people all along its route and victoriously completed its historic mission.' This statement I feel is extravagant to persuade the reader of the Red Army's qualities. I can see why the three Chinese historians have used the word 'unconquerable'. In 1937 when Japan began a full-scale invasion of China it bought terrible hardship to the people. ...read more.

It is really during the Long March that a large portion of Chinese population first encountered and subsequently adopted the Marxist beliefs. Nevertheless, the Chinese Communist Party suffered heavy casualties. From the 100 000 members who departed only 20 000 arrived at destination, including the newcomers recruited along the way. The Long March was probably the key event that brought the Chinese Communist Party to power. The success of this first step yielded a formula that greatly influenced the upcoming events in communist China. The Long March is still seen as one of the most important events in China's history for the following effects: 1) It kept Communism alive in China (LT) 2) It was a huge practical and propagandist victory. The soldiers were marching through the countryside spreading the ideas of communism. Soon everybody was talking about Mao Tse- tung and the fantastic story of human determination. (ST) 3) This march established Mao Tse-tung as the main leader of the Chinese Communist Party. (ST) The 1911 Revolution of the Double Tenth overthrew the old imperial regime and a period of Nationalist government of China began. This was the end of 4,000 years of the hated Manchu Dynasty. China was ruled by the Kuomintang, under Dr Sun Yat- Sen. The new government faced threats from local warlords and the Japanese. ...read more.

A long-term effect of the Long March is that people did not have any freedom of thought because they had to follow Communist rules and were subjected to endless propaganda. Both the Tiananmen Square massacre and Long March had a high death toll, which had a dramatic short-term effect. However the Long March resulted in victory for communism and defeat for the pro democratic demonstrations. The victory from the Long March however had a greater impact on Chinese history as it had a long term effect on society as communist ideas were put in place whereas at the Tiananman Square massacre nothing was achieved only lives were lost. Conclusion The commitment and sheer determination that enabled the remaining troops to survive the Long March helped the Chinese Communists establish themselves as the future leaders of China. Mao Tse- tung's strategic genius helped establish the Chinese Communist Party as indestructible. Because of his guerrilla warfare tactics during the campaigns and his ability to know what the Kuomintang and Chiang Kai-shek were going to do, he brought a sense of mystery and power to his Party. From comparing the Long March against other events in the Twentieth Century such as the 1911 Revolution and the Tiananmen Square massacre I can see that the Long March had the greatest impact on Chinese history. Had the Long March never occurred, it is quite possible that China would be today under Japanese rule. ...read more.