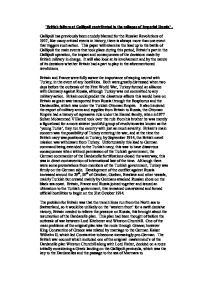 'British failure at Gallipoli contributed to the collapse of Imperial Russia'.

'British failure at Gallipoli contributed to the collapse of Imperial Russia'. Gallipoli has previously been crudely blamed for the Russian Revolutions of 1917, like many critical events in history, there is always more than one event that triggers such action. This paper will examine the lead up to the battle of Gallipoli the main events that took place during this period, Britain's part in the Gallipoli operation, the impact and consequences of the decisions made by British military in charge. It will also look at its involvement and by the nature of its decisions whether Britain had a part to play in the aforementioned revolutions. Britain and France were fully aware the importance of staying neutral with Turkey, in the event of any hostilities. Both were greatly distressed when two days before the outbreak of the First World War, Turkey formed an alliance with Germany against Russia, although Turkey was not committed to any military action. Britain could predict the disastrous affects this would have on Britain as grain was transported from Russia through the Bosphorus and the Dardanelles, which was under the Turkish Ottoman Empire. It also hindered the export of military arms and supplies from Britain to Russia, the Ottoman Empire had a history of repressive rule under the Hamid family, when in1877 Sultan Mohammed V Hamid took over the rule from his brother he was merely a ...read more.

Seaplanes used as spotters to enable the fleets gunnery to range on the shore batteries, were constantly hindered by weather conditions, this prevented most of the time the beneficial use of these seaplanes. The mounting pressure caused from these delays and the insistence by Churchill to Carden for 'urging haste in the operation', resulted in Carden to suffer a nervous breakdown. De Robeck took command of the fleet, although there was a more suitably experienced Rear Admiral by the name of Rosslyn E. Wemyss, de Robeck took command; a questionable decision like many others made by the military during the Gallipoli operation. De Robeck made his first attack on the 18th March 1915, what was of great concern was his inconspicuous plan, when he led HMS Queen Elizabeth with the first wave up the channel towards Kephez minefield, he was in full view of the Turkish and German Artillery spotters, who could quite clearly see what was happening. The plan was to pound the forts at Kale and Kilid Bahr from a distance of approximately eight miles believing the forts would not be able to reply, this was not the case as the coasted and mobile batteries kept up a constant fire, damaging the structure of many of the ally battleships. ...read more.

The revolutions of 1917 would have taken place regardless of the outcome in Gallipoli, if munitions had of reached Russia sooner, they would have kerbed Russia's hunger or gave ammunition to its soldiers, but it would not have taken away the feeling that time had come for tsarist rule to end and a political power that represented the people to begin. There were large no of casualties for all countries concerned, but for Britain Gallipoli was a major defeat, not only in the lives of the many British troops, but it also destroyed Britain's reputation for navel supremacy. The people of Britain could not believe the defeat and the French navel commanders no longer trusted British navel intelligence. Gallipolis legacy is bitter sweet for the negative backlash against Britain for its lack of military leadership but here is a positive side for the Australian and New Zealand troops who had entered the war for the first time, their courageous fight and solidarity amongst its troops was tremendous and hence is celebrated on the 25th April every year and is known as ANZAC day. The British Gallipoli plan was seen by both politicians and military authorities of the time as being the only truly innovative strategic concepts of the entire war, unfortunately its allied commanders were less than innovative their lack of planning military tactics and the absence of competent leadership was the real essence behind the failure at Gallipoli. . ...read more.