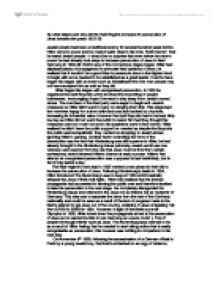 By what stages and why did the n**i Regime increase it's persecution of Jews between the years 1933-39. Jewish people had been a traditional enemy for several hundred years before Hitler came to power and he made it quite clear in his book, 'Mein Kampf,' that he hated Jewish people. It should be no surprise that even before he rose to power he had already took steps to increase persecution of Jews in n**i Germany in 1933-39. Before any of the momentous stages began, Hitler had displayed plenty of propaganda to advocate n**i opinions of Jews, he realised that it wouldn't be a good idea to persecute Jews to the highest level to begin with as he needed to be established as a great leader. Had he have began his stages with an event such as Kristallnacht the German people may not have accepted him as well as they did. Hitler began his stages with unorganised persecution, in 1933 he organised the April Boycotts which involved the boycotting of Jewish businesses, encouraging Aryan Germans to stay away from Jewish owned stores. ...read more.

Hitler had realised that the intense propaganda had succeeded in winning the public over and therefore decided to take his persecution to the next stage. He completely disregarded the Hindenburg clause and referred to the Jews not as citizens but as 'subjects' of Germany. This step was to separate the Jews from the rest of the Germany nationality and could be seen as a result of the lack of progress made in the n**i's attempt to get Jews out of the country, statistics of Jews emigrating fell from 37000 to 23000 in 1934. However, in light of the Berlin summer Olympics in 1936, Hitler toned down the propaganda aimed at the persecution of Jews as he wanted tourists to see Germany as a pure country, free of people he though inferior such as Jews. The Nuremburg laws seemed to be as a result of Hitler feeling that he needed to start taking action that is easily recognisable as persecution; this however was nothing in comparison to his next step. On November 9th 1938, following the assassination of a German official in Paris by a young Jewish boy, the n**i's embarked on an orgy of violence, destroying Jewish Property in predominantly Jewish towns in Germany. ...read more.

Hitler named this 'the final solution of the Jewish question' this stage seemed ooze a sense of desperation, nothing Hitler had done before had deterred the Jews enough for them to flee wherever they could. Once in concentration camps, had they not died of diseases such as Typhus, the Jews were systematically gassed in chambers, sometimes up to 2000 at a time. The name 'final solution' suggests that this really was the last straw for Hitler, he felt there was no other way to rid Germany of the Jews as although the first camp opened in 1933 (Dachau) they weren't widely used until 1939, these camps could be seen as a precautionary measure. It is evident that Hitler had many ideas as to how to persecute Jews; he started with quite mild measures and gradually escalated things as a result of unresponsive behaviour from Jews. The pressure he was under from other n**i party members in the early stages probably pushed him to cross the line into breaking the law to persecute Jews. The latter stages of these measures may not have happened had the Jews emigrated when they were encouraged to. ...read more.