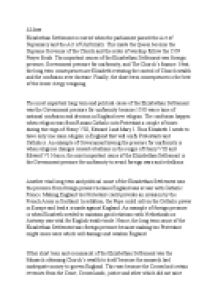 Causes and Consequences of the Elizabethan Settlement

Transfer-Encoding: chunked ﻿3.5 Essay Elizabethan Settlement occurred when the parliament passed the Act of Supremacy and the Act of Uniformity. This made the Queen become the Supreme Governor of the Church and the order of worship follow the 1559 Prayer Book. The important causes of the Elizabethan Settlement was foreign pressure, Government pressure for uniformity, and The Church?s finance. Next, the long term consequences are Elizabeth restoring the control of Church wealth and the confusion over doctrine. Finally, the short term consequences is the best of the lesser clergy resigning. The most important long term and political cause of the Elizabethan Settlement was the Government pressure for uniformity because 1558 was a time of national confusion and division in England over religion. The confusion happen when religion was from Roman Catholic into Protestant a couple of times during the reign of Henry VIII, Edward I and Mary I. Thus Elizabeth I needs to have only one main religion in England that will unify Protestants and Catholics. ...read more.

The fruit and tenths were levies in the clergy. Therefore, the short term cause of the Elizabethan Settlement was for the Monarch having more money by making Church its revenue. Adequate money can help the Crown govern England easier than having not enough money. The Elizabethan had some positive consequences. The most important long term, economic and positive consequence was Elizabeth restoring control of Church wealth because the Monarch needed more money for running the country and there was royal poverty. Without the Church wealth, Queen Elizabeth I could not hire quality people to help her govern England since no one wants job with little pay. Elizabeth I gained access to First fruits and tenths and revenue from the land of vacant Bishoprics. An example of this was when A See in Oxfordshire was left vacant for the whole of Elizabeth?s reign. This was to allow Elizabeth to harvest fruits of that position. Thus, the Crown restoring control of Church?s wealth benefitted people?s lives by preventing Royal poverty which would have cause unemployment of jobs and weaken the power of the Monarch to help the people. ...read more.

Overall, the effects of the Elizabethan Settlement were largely positive because she managed to establish a unified national Church where both Catholic and Protestant could go to. It did not satisfy the extremists of both Protestant and Catholic, however she did manage to satisfy the majority of normal people. In addition, Elizabethan Settlement led to lots of change in England which were mainly long term. Making the Church of England Protestant with rituals similar to Catholic put an end to extreme Protestants and Catholics. This was because the settlement prevented the Puritans to make the Church more Protestant with Calvinist theology. England were more Protestant after lots of Catholics bishops resigned which made Protestants take over their jobs. Also, Elizabeth?s exploiting the financial position of the Church weakened the ability of bishops to impose her own idea of a Church upon the people. Catholicism was becoming a minority religion by the end of the reign. Therefore, Elizabethan Settlement had a positive long term consequence and impact on people?s live by forming uniformity in people through the Church of England. ...read more.