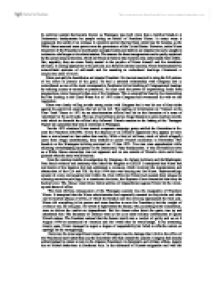 he political scandal that became known as Watergate was much more than a botched break-in at Democratic headquarters by people acting on behalf of President Nixon. In many ways it represents the zenith of an increase in executive power that had been under way for decades as the White House assumed more power over the governance of the United States. However, under Nixon the power of the Presidency went beyond accepted norms and took on an imperial feel as he sought to undermine challenges to his administration. The reasons for these transgressions can be partly explained by the social unrest at the time, which led Nixon to believe that America was under attack from within. But, arguably, they are more firmly rooted in the psyche of Nixon himself and his immediate advisers. In seeing opposition to his policies as a threat to national security, Nixon demonstrated his over-inflated opinions of self-worth and his resorting to underhand dealings illustrated a suspicious state of mind. Nixon can aptly be described as an imperial President. He was not reserved in using the full powers of his office in pursuit of his goals. He had a strained relationship with Congress and is remembered as one of the most uncooperative Presidents for his blocking of Congressional hearings by refusing access to records or personnel. ...read more.

The House voted three formal articles of impeachment against Nixon for the cover-up and abuse of office. The most obvious consequence of the Watergate scandal was the resignation of President Nixon. It transpired that the Nixon administration had repeatedly resorted to dirty tricks and what can be deemed abuses of office, of which the break-in and the cover-up represented the final acts. Nixon did everything in his power and more besides to save his Presidency but the weight of evidence was far too great. He vowed to fight before the Senate, who, according to the Constitution, were to deliver the verdict on impeachment. But his closest aides knew the game was up and abandoned him. The Secretary of Defense went so far as to order military commanders to ignore Nixon's orders. The President realised that the Senate would vote a verdict of guilty and so on 8 August 1974 he announced to America and the world that he would resign. In his remaining twenty years, Nixon managed to regain a degree of respectability but failed to offer the nation an apology for his wrongdoings. However, the most significant impact of Watergate was the damage that it did to the office of the Presidency itself rather than just the incumbent who had created the scandal. ...read more.

The Nixon White House years did more than just amplify disillusionment with politicians; the nation's view of itself was affected as well. The bicentennial celebrations of the United States in 1976 were, untypically for the Americans, a somewhat muted affair, which represented the self-doubt that had entered the nation's psyche, as it could see itself falling short of the noble values from which it was born. But above all else, it was the devaluing of America's most prized institution, the Presidency, in the eyes of the people as well as the other branches of government that was the real legacy of Watergate. It is clear that Watergate had a huge impact upon the United States in various ways and that its consequences in the short term, Nixon's resignation and the elevation of Gerald Ford to the White House, are equalled by the longer-term damage that it did to the Presidency. Can it be said that anything positive arose from Watergate? The suffix `gate' subsequently entered the English language for scandals involving politicians (Irangate, Monicagate) thus ensuring the episode will remain in public consciousness. And at least America could console itself that the Constitution's checks and balances were demonstrated to be working well in the end. After all an incumbent President, the most powerful man in the world, had been brought down by a system designed nearly 200 years previously. James Madison would have approved. ...read more.