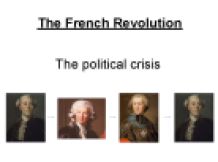 Causes of the French Revolution - the political crisis.

The political crisis The French Revolution Jacques Necker Attempted to sell many offices (titles) Tried to restrict borrowing Was fired in 1781 as Chancellor due to huge deficit of 295 million livres Replaced by Joly de Fleury who was soon replaced by Charles Alexandre de Calonne Charles Alexandre de Calonne Undid much of the work of Necker Reformed the tax system to attack ...read more.

a 1787 political overhaul Brienne kept land tax but wanted a new Treasury, reformed education system, more efficient army and accessible laws These plans were rejected as only the Estates-General had this authority Louis reacted by exiling Parlement to Troyes in August 1787 ? Aristocrats rioted and the Clergy broke their loyalty to the Crown By mid-1788, the royal Treasury was empty Later that ...read more.

a Chancellor as bad as Necker The crisis outlined weaknesses in the Crown, challenging the ?absolute ruler? The failure to pass reform paralysed the French government This political instability led many to think that the country was in disarray and in desperate need of significant change Along with the economic crisis, the political crisis was the most important short-term cause of the ensuing revolution ...read more.