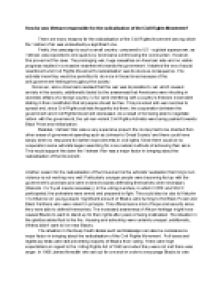 Causes of the radicalisation of the Civil Rights Movement

﻿How far was Vietnam responsible for the radicalisation of the Civil Rights Movement? There are many reasons for the radicalisation of the Civil Rights Movement among which the Vietnam War was undoubtedly a significant one. Firstly, the campaign to such a small country, compared to US - a global superpower, as Vietnam was expected to end quickly by Americans overthrowing the communism. However, this proved not the case. The prolonging war, huge casualties on American side and no visible progress resulted in a massive resentment towards the government. It started the era of social resentment and Civil Rights Movement?s radicalisation was its obvious consequence. The activists knew they would be permitted to do more in those times because of the anti-government feelings throughout the society. Moreover, some Americans realised that the war was impossible to win which caused anxiety in the society, additionally fueled by the awareness that Americans were intruding in domestic affairs of a foreign country. ...read more.

This would support the claim the Vietnam War was a major factor in bringing about the radicalisation of the Movement. Another reason for the radicalisation of the Movement is the activists? realisation that King?s non violence is not working very well. Particularly younger people were becoming fed up with the government?s promises and were inclined towards defending themselves when necessary (Malcolm X?s ?by all means necessary). In the voting marches, in which CORE and SNCC participated, the protesters were armed and prepared to fight. This could also be due to Malcolm X?s influence on young people. Significant amount of Blacks were turning to the Black Power and Black Panthers who were violent in principle. This offered some kind of hope and security since they were able to defend themselves. ...read more.

Lastly, the radicalisation in Civil Rights Movement can be attributed to the divisions following a change in leadership in SNCC and CORE. A good example of the division is the Meredith March where non-violent SCLC members were chanting ?freedom now? while SNCC turned to aggressive ?black power?. The new leaders of SNCC (Stokely Carmichael) and CORE (Floyd McKissik), consisting of young eager people, were Black Power enthusiasts and proved to be much more radical and violent than the previous ones. All things considered, the Vietnam War was responsible for the radicalisation of the Civil Rights Movement only to a small extent. Even though it evoked anti-government feelings fueling the violence it was not its deepest cause. The reason for the radicalisation of the Movement lies in the ghettos. The poverty, poor education, lack opportunities and generally low standard of living were a trigger to the whole change in the Movement. We can see this in the race riots which occurred in all the bigger cities. ...read more.