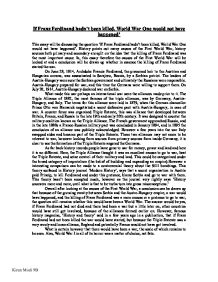 The French government approached Russia, and in the late 1880s a Franco-Russian military pact was concluded in January 1894, and in 1895 the conclusion of an alliance was publicly acknowledged. However a few years into the war Italy swapped sides and became part of the Triple Entente. These two alliances may not seem to be relevant to war, however looking from sources from primary sources from inside Germany, it is clear to see the formation of the Triple Entente angered the Germans. As far back history records people have gone to war for money, power and land and here it is no different. Here, the Triple Alliance thought it was an excellent excuse to go to war, beat the Triple Entente, and seize control of their military and land. ...read more.

The answer would be yes, if Franz Ferdinand had not died and there had been a war but a little later on, other countries would have still got involved, because of the alliances formed earlier on. However, famous history magazine, 'History and theory' said in a few years ago in a publication, that if Franz Ferdinand had not been killed the war would have started, but because the Triple Entente was a very wooly and loose alliance, England and potentially France would not have got involved. What is certain however that there would have been a war, the scale of which remains to be seen. Alas, World War I in all of its horror was a matter of choice, not fate. ...read more.