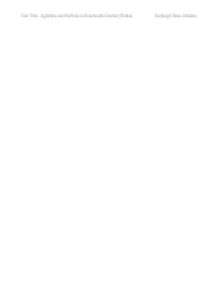 Changes To British Society Brought by Industrialisation: Roles of Women and Children

﻿Unit Title: Agitation and Reform in Nineteenth-Century Britain Kayleigh Giles-Johnson ________________ Changes To British Society Brought by Industrialisation: Women and Children During the time of the industrial revolution, the roles of women and their children changed dramatically, transforming them from stay at home mothers and wives to wage-earning workers. This was due to a number of factors, most notably the need to support the large families that were a result of the booming birth rates and a much higher life expectancy than ever before. As industrialisation set in and factories were being built all over the country, the possibilities of jobs in agriculture lessened, resulting in many young women flocking to towns and cities in search of work (www.bbc.co.uk/history, 2009). ...read more.

A lot of the time the work was so casual and low-profile that it was not even declared, with women regarding it as less important than their appearance as wives and mothers. Sometimes it was just because they wanted it to be kept a secret from their husband, or because their line of work was quite simply illegal, such as prostitution (www.bbc.co.uk/history, 2009). This is why the evidence of women's work from censuses and wage books is not entirely accurate. With men generally employed in the more highly skilled areas of work such as shipbuilding, engineering and transport, the women were quite often left to the more domestic jobs that men felt were not suitable for them to do themselves. ...read more.

Others argue that it was simply exploitation and that forcing women to do the lower paid, longer hours was lowering their already inferior position in society, not gaining them respect (Bartley, 1996, p. 47). In conclusion, both women and childen had to show incredible strength and work hard to support themselves as a result of industrialisation, dramatically changing their role in both their families and in society. I believe the change from house wife to working woman is something has influenced Britain in a positive way and has changed it for the better, not only liberating women but helping them set a positive example for their families. Reference List Bartley, P. (1996), The Changing Role of Women 1815-1914, London: Hodder & Stoughton Child Labour & The Industrial Revolution Available online at: http://www.nettlesworth.durham.sch.uk/time/victorian/vindust.html [Accessed 25 September 2012] Women's Work Available online at: www.bbc.co.uk/history/british/victorians/womens_work_01. ...read more.