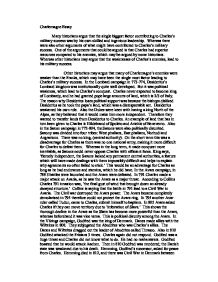 Charlemagne Essay Many historians argue that the single biggest factor contributing to Charles's military success was by his own skilled and ingenious leadership. Whereas there were also other arguments of what might have contributed to Charles's military success. One of the arguments that could be argued is that Charles had superior resources compared to his enemies, which may be argued by some historians. Whereas other historians may argue that the weaknesses of Charles's enemies, lead to his military success. Other historians may argue that many of Charlemagne's enemies were weaker than the Franks, which may have been the single most factor leading to Charles's military success. In the Lombard campaign in 773-774, Desiderius's Lombard kingdom was institutionally quite well developed. But it was political weakness, which lead to Charles's conquest. Charles never expected to become king of Lombardy, and he had granted pope large amounts of land, which is 2/3 of Italy. The reason why Desiderius loses political support was because the bishops disliked Desiderius as he took the papa's land, which was a disrespectable act. Desiderius weakened his own rule. Also the Dukes were keen with having a king North of the Alpes, as they believed that it would make him more independent. Therefore they wanted to transfer lands from Desiderius to Charles. An example of land that has in turn been given to Charles is Hildebrand of Spoleto and Arichis of Benevento. Also in the Saxon campaign in 772-804, the Saxons were also politically disunited. Saxony was divided into four tribes: West phalians, East phalians, Norhudi and Angrarions. There was no king, (central authority). On the short term this was a disadvantage for Charles as there was no one national army, making it more difficult for Charles to defeat them. Whereas in the long term, it made conquest more inevitable, as Saxons could never oppose Charles with efficient force. King says, 'fiercely independent, the Saxons lacked any permanent central authorities, a feature which will have made dealings with them impossibly difficult and helps to explain why agreements so often failed to stick.' ...read more.

The vassi were also used as a 'scarae'. This was either a small mounted force, such as in 778 where Charles sent a scarae to 'hasten at speed' Saxon frontier. Or a scarae was used as an intelligence gathering, garrison castles. The rapid raid into enemy lands, such as in 773 where there were 2 armies, and there was a scara used as an outflanking manoeuvre. The Frankish army was also well armed. The 806 Mobilisation Alert shows that cavalry carried a shield, spear, two swords and a bow and arrow. Ordinary freemen used a shied and spear. According to Latoche Royal estate craftsmen provided much military equipment. The arrows used became necessary against Avars and Slavs who showed Charles the value of archery. 802/3 cap shows that typical weapons of freemen were a spear and shield. Royal estates were able to provide shields, spears, wagons, horses for the army. Logistical problems in general seem to have been considered carefully. Mounted knights, large infantry armies, equipment, weapons and supplies were used by the Franks on most campaigns. To provide all the army's needs required a considerable depth of resources as well as efficient administrative institutions. Charles's funds were not limitless and the Frankish administrative structure was at best adequate; they were superior to most of Charles's enemies. Counts, bishops and abbots acted as mobilization authorities and missi helped and checked up on local officials. Caps show that a national system of recruitment existed which provided infantry sources with substantial size. Cap to the missi 792/3 and 802 Programmatic Cap say that the count 'should bring every man' to the army. The armies used by Frankish freemen as foot soldiers supplemented by troops from subjugated lands. AKF reports that the army, which attacked Saragossa, came from Burgundy, Austrasia, Bavaria, Provence and Septimania. Later on Saxons were used in campaigns against the Slavs. As empire expanded so did the source of troops. ...read more.

Charles also used castles called Castra, on the Elbe River against Slavs, to deter the Slavs. Charles keen in maintaining morale in his army shows another degree of Charles's ingenious and skilled leadership. This was firstly done by distribution of booty among his vassals. In the Avars ring in 795-6, there was a huge booty coming from the Avars. Charles distributed the booty along his vassals. Also when fighting the Saxon, they were fighting a Holy war, a war behalf of God. Barraclough argues that Charles was 'helpless' against the Vikings. He says he had 'no idea of the importance of sea power.' Barraclough sees Charles strategy against the Danes as a failure and see this as one of the decomposition of the end of Charles's reign. However other historians such as Bullough argues that against Charles's coastal defences comprised 'enterprising measures.' Hayward argues that both Charles understood both the threat of Dane and the necessary of countermeasures that needs to be taken against them. Hayward argues that it was impossible for Charles to protect the entire coastlines, he a had to accept some devastation of isolated coasts. Hayward argues that Charles realised he should build fortifications on the near main estuaries. It was important for him to protect churches and monasteries, trading centres, example of trading centres are Dorectad and Quentorii. Charles was able to protect those that needed to be protected. The estuaries he tried to protect were Loine, Seine and Rheine. In order to protect estuaries, he stationed a fleet at Boulogne and had restored an old Roman house. Naval power played an important role in the conflict in the Mediterranean according to Collins, as well as other campaigns. King says that, 'Charles was well aware of the value of fleets and the need for protection against those of oterher, as the capitularies, among other sources, indicate.' Also according to Collins Naval power was a factor in the confrontation with Godfred, king of the Danes. ...read more.