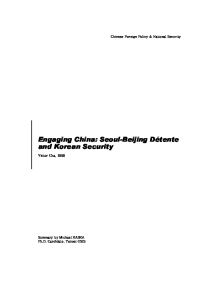 Chinese Foreign Policy & National Security Engaging China: Seoul-Beijing D�tente and Korean Security Victor Cha, 1999 Summary by Michael RASKA Ph.D. Candidate, Yonsei GSIS The China-South Korea axis is perhaps the most overlooked variable in the strategic environment of Northeast Asia. For nearly five decades their relationship was characterized by war, lack of dialogue and non-recognition; then, over a period of some three years, this situation gave away to fully normalized and amiable relations in 1992. Rapprochement between Seoul and Beijing in 1992 opened one of the first frontiers of the post-Cold War thaw in the region, and future security will hinge at least partly on this core relationship. In this context, Cha analyzes the evolution of Sino-South Korean reconciliation, and argues that the South Korea's engagement policy from the late 1980s in the political, economic, and cultural arenas played a major part in eliciting unprecedented cooperation from Beijing, however, its initiatives alone were not a sufficient condition to prompt this cooperation. A prior and necessary condition was a change in the strategic context surrounding China and the Korean Peninsula that raised both the benefits of cooperation and the costs of non-cooperation; the end of Cold War . ...read more.

which implied mutual economic prosperity as a means of expanding diplomatic ties with former adversaries as well as assuming a leading role for South Korea in international organizations and the continued expansion of program multi-directional diplomacy (i.e. using meetings of multilateral bodies such as APEC, ASEAN, non-governmental track-two diplomacy, high-level military exchanges). The second method of engagement has been sports diplomacy - participating in athletic competitions hosted by each country provided a useful means by to express good will and interest in expanding the economic cooperation (Seoul 1988 Olympics, Beijing Asian Games 1990). What was the benchmark of success of South Korea's engagement strategy? The key was not only engaging China, but also the terms of policy toward North Korea. The following measure could be used: (A) Failure - Chinese support of North Korea (B) Minimal Success - '1.5' Korea policy; formal support of North Korea and de-facto recognition of South Korea (C) Moderate Success - equidistance between North and South Korea (D) Very Successful - discourage North Korean provocation and aggression (E) Most Successful - China supports only South Korea Cha argues that the outcome of South Korea's engagement falls in the middle range (B to D). ...read more.

Both states are aware of this factor, and share similar interests. However, Beijing seems to be in a dilemma, it desperately does not want to face a collapse of North Korea nor does it want to see a nuclear North Korea. Hence, China's actions in the foreign policy arena are still bound to the minimum necessary level to ensure stability. Ironically, while the Chinese officials have been claiming that they are making efforts to persuade North Korea to enter multilateral dialogue and negotiation, they also claim that North Korea doesn't listen as it used to. In this regard, my question is: How much leverage does China have over North Korea? :) 1 From the ROK perspective, during the Cold War China was part of the communist bloc, a patron of revolutionary regimes in Asia, and thus one of the primary threats to South Korea's survival. China's intervention in the Korean War in 1950, in conjunction with the July 1961 Friendship Treaty between China and North Korea with its automatic intervention clause cemented South Korea's perceptions of China as a threat. At the same time, China's hostility toward South Korea was equally intense. South Korea was the 'fascist' axis of the 'iron triangle' that included 'U.S. imperialism', and 'Japanese militarism.' ?? ?? ?? ?? 1 ...read more.