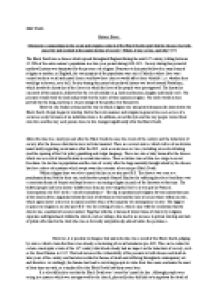 Chroniclers commenting on the social and religious context of the Black Death report that the disease was both caused by and resulted in the moral decline of society. Which, if any, is true, and why?

﻿Matt Walsh History Essay- ?Chroniclers commenting on the social and religious context of the Black Death report that the disease was both caused by and resulted in the moral decline of society?. Which, if any, is true, and why? [25] The Black Death was a disease which spread throughout England during the mid-14th century, killing between 35-70% of the entire nation?s population in a four year period during1348-1351. Society during this period of medieval history was dominated by the presence of religion. Everyone at this point believed in some form of religion or another; in England, the vast majority of the population were strict Catholics whose lives were centred on their social and moral choices and how these choices would affect their ?afterlife?, i.e. whether they would go to heaven, or to h**l. Society during this period of medieval history was based around Feudalism, which involved a hierarchy of the classes in which the lives of the people were presupposed. ...read more.

Within religion there was also a moral decline in society post-B.D. The disease was seen as a punishment from God for their sins, and therefore people blamed Him for the suffering they faced and there was a consistent theme of despair and hopelessness concerning religion in much of the literature at that time. The faithful people had been shown ?indifference from an over-vengeful God? as it was put by Petrarch. Consequently, the B.D. bred a ?cult of remembrance?. The dip in spiritual and religious fervour meant that men of the church often complained about the lack of devotion to God and the lack of social values within society, which again shows a decrease in morals and the ethics of the majority of contemporary society. The biggest response to religion in society post-B.D. was the seeking of solace, which came with the realisation that the church was a method of societal control. ...read more.

Furthermore, although after the Black Death there was a decrease in faith towards the church, at the time many people were convinced that the disease was in fact a punishment for their sins and immoral actions within society. Therefore, many contemporary accounts of the pestilence would in fact have associated it with God and retribution for their moral negligence. In conclusion, the hypothesis can be considered truthful to a certain extent. This is because, although physically impossible that the Black Death was caused by a moral decline in society in the mid-14th century, at the time it was widely believed that this was exactly the cause of the disease. Moreover, after the Black Death lifestyle in England changed radically and there was a new ideology held by many, especially serfs, as to how life should be lived and whether in fact the role of God and religion as a part of life was in fact as necessary as they had thought before they were ?unfairly? punished for their moral wrongdoing. This lead to a substantial decline in social traditions and collective belief in ?appropriate behaviour? within society. ...read more.