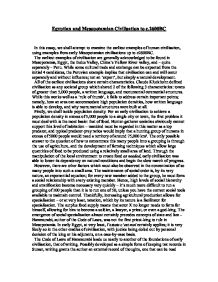 Civilisation. In this essay, we shall attempt to examine the earliest examples of human civilisation, using examples from early Mesopotamian civilisations up to c2600BC.

Egyptian and Mesopotamian Civilisation to c.2600BC In this essay, we shall attempt to examine the earliest examples of human civilisation, using examples from early Mesopotamian civilisations up to c2600BC. The earliest examples of civilisation are generally acknowledged to be found in Mesopotamia, Egypt, the Indus Valley, China's Yellow River valley, and - quite separately - Peru. While some cultural trade and exchange can be expected from the initial 4 candidates, the Peruvian example implies that civilisation can and will occur separately and without influence; not an 'export', but simply a natural development. All of the earliest civilisations share certain characteristics. Claude Kluckhohn defined civilisation as any societal group which shared 2 of the following 3 characteristics: towns of greater than 5,000 people, a written language, and monumental ceremonial structures. While this works well as a 'rule of thumb', it fails to address certain important points; namely, how an area can accommodate high population densities, how written language is able to develop, and why monumental structures were built at all. Firstly, we shall tackle population density. For an early civilisation to achieve a population density in excess of 5,000 people to a single city or town, the first problem it must deal with is the most basic: that of food. ...read more.

The eventual result of these major innovations is the rise of the city. Cities are the very essence of civilisation; the engines of progress which drive the advancement of technology and philosophy. Fed by the agricultural surplus, controlled by the new governments, and protected by the newly specialised military elites, the city allowed people to learn new trades and develop new concepts. Pottery can emerge in newer, more impressive forms; masonry can be developed and refined, and ideas such as mathematics, geometry, natural philosophy and any other conceptual discipline can be followed. It is no surprise, then, given the primary importance of the food supply, that the first civilisations emerge without fail on flood plains. Until irrigation and other farming technology is developed, the dark alluvial soil of the Mesopotamian flood plains, or the Nile river valley, is the only medium which can be exploited for the kind of mass-production of food needed for human population to reach the 'critical mass' required for civilisation. Water is, of course, one of the main requirements of life; it would appear that it is also the catalyst for civilisation, not merely in the direct provision of drinking water, but also in the action of laying down fresh soil each year. Mesopotamia is often regarded as the initial starting point of civilisation as a whole, considered to pre-date the other centres, with the early 'Ubaid period beginning in c6000BC. ...read more.

The city states themselves became increasingly fortified, and warfare between the various kings became near-constant. In spite of the healthy food surpluses, and the vast storehouses kept for grain, farmland and water were a constant prize for these wars, possibly due to food being the primary trade good. While these wars were often violent and repetitive, the 'king of Kish' would occasionally be brought in for arbitration between feuding states; this king could also seemingly try to call on the military aid of other kings should he need it, although not always successfully. This principal of 'first amongst equals' appears to have been shaky at best, with the other states never far enough behind the leader to be safely considered vassals. In conclusion, the origin of civilisation is firmly connected to the supply of food. It is the surpluses which allow it to arise, it is the fertility of the flood plains which marks the site of early civilisation, and it is even the food wealth of Mesopotamia which created the technological hotbed of organised warfare. The intensive competition for limited agricultural land, with little other natural resources, naturally encouraged startling innovations, such as writing and the wheel, just as in Greece they led to the growth of philosophy and mathematics, and in Europe to the rise of the jet fighter and the ballistic missile. ...read more.