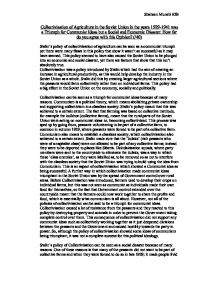 Collectivisation of Agriculture in the Soviet Union in the years 1929-1941 was a Triumph for Communist Ideas but a Social and Economic Disaster. How far do you agree with this Opinion?

Collectivisation of Agriculture in the Soviet Union in the years 1929-1941 was a Triumph for Communist Ideas but a Social and Economic Disaster. How far do you agree with this Opinion? (/40) Stalin's policy of collectivisation of agriculture can be seen as a communist triumph yet there were many flaws in this policy that show it wasn't as successful as it may have seemed. This policy seemed to have also caused the Soviet Union to be plunged into an economic and social disaster, yet there are factors that show that this isn't absolutely true. Collectivisation was a policy introduced by Stalin which had the aim of creating an increase in agricultural productivity, as this would help develop the industry in the Soviet Union as a whole. Stalin did this by creating larger agricultural sections where the peasants would farm collectively rather than on individual farms. This policy had a big effect in the Soviet Union on the economy, socially and politically. Collectivisation can be seen as a triumph for communist ideas because of many reasons. Communism is a political theory, which means abolishing private ownership and supporting collectivism in a classless society. ...read more.

This consequence of collectivisation did not support any communist ideas such as collectively working together as it just deepened divisions between the peasants and the Government and caused hostility towards the party in power. So, although the policy of collectivisation showed some ideas of communism being triumphant, it was not a complete success for this political ideology. Stalin's policy of Collectivisation can be seen as a social disaster because of many reasons. One of these reasons is that many of the peasants did not want to be part of collective farms and when they were forced to do so in late 1929; it made people livid and caused the peasants to be deeply angry with the Government. This was not a social success. Also, collectivisation meant that the influence of some traditional social roles such as the village priest was removed. This shows that, socially, the rural areas were weakened as the Government took control by separating people from influential roles such as the school teacher. A further reason as to the policy of how collectivisation was a social disaster is because it abolished peasant controlled mir which is a village commune made up of peasant elders. ...read more.

The fact that the rural population starved was because they had to make food for export to achieve foreign exchange that was necessary, and a lot of their food was given to feed the towns, so the peasants themselves were, in the end, deprived of food. The policy of collectivisation can be described as an economic disaster partly because of the rushed way in which it was set up. There was not enough planning and the way in which the policy was carried out was very disorganised, so these factors contributed to the economic disaster that collectivisation introduced. However, it can't be said that the Soviet Union suffered from complete economic disaster because the creation of Motor Tractor Stations meant that the collective farms were supplied with tractors, machinery and also political lectures to help the peasants with farming. Although this certain strategy became despised by the peasants as they believed that the Government was interfering with the countryside, it was an economic success, though not a social or political success. In conclusion, the introduction of collectivisation of agriculture cannot be seen to be a complete economic and social disaster, as there were certain good factors that came out of this policy. This policy was also not a complete triumph for communism as there were certain aspects of collectivisation that did not fit in with communist ideologies. Shaheen Munshi 62B ...read more.