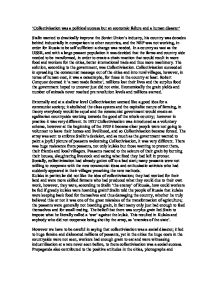 'Collectivisation was a political success but an economic failure and a human disaster' Stalin wanted to drastically improve the Soviet Union's industry, his country was decades behind industrially in comparison to other countries, and the NEP was not working, in order for Russia to be self sufficient a change was needed. In a country as vast as the USSR, and with a large peasant population it was decided that the farms and country side needed to be transformed, in order to create a chain reaction that would result in more food and workers for the cities, better international trade and thus more machinery. The solution, according to the government, was Collectivisation. Collectivisation succeeded in spreading the communist message out of the cities and into rural villages, however, in terms of human cost, it was a catastrophe, for those in the country at least. Robert Conquest deemed it 'a man made famine', millions lost their lives and the surplus food the government hoped to uncover just did not exist. Economically the grain yields and number of animals never reached pre revolution levels and millions starved. Externally and at a shallow level Collectivisation seemed like a good idea for a communist society; it abolished the class system and the capitalist nature of farming, in theory everybody would be equal and the communist government would create an egalitarian countryside working towards the good of the whole country; however in practice it was very different. ...read more.

In the Ukraine alone, historians such as Werth and Conquest have estimated the death toll at around 6 million, a huge cost in human life. In keeping with Stalinist values, the peasants were not seen as important, they were inferior to the workers and so there welfare was not considered top priority during the implementation of collectivisation. As a result of this Peasants experienced extreme hardships, poverty and death as a result. Those who were relocated to collective farms had to survive transport and the imposition of completely new ways of living and farming. Those who were no longer needed went to the cities were they experienced extreme dislocation, this then in turn affected industrilisation as poorly trained peasants with little disciplined were put into factories. In terms of the economic achievements of collectivisation it seems unjust to call it a failure, Stalin succeeded in modernising many aspects of rural farming in 10 years, a task which had taken many western countries generations. Tractors could be used on bigger stretches of land to sow seeds and help make farming more efficient. Collectivisation also freed 17 million workers to go towards the city and help contribute towards industrialization and the five year plans. Although figures must be dealt with carefully as they are not always accurate, by the end of 1931 the state collected 22.8 million tones of grain, which ...read more.

Many historians have blamed the social failure of collectivization on the speed it was put into effect; in theory it seemed a good idea in keeping with communist values, however the speed at which Stalin tried to enforce and change the system came at a huge cost to human life. Soviet Russia had succeeded in modernising ancient farming methods and were able to trade with foreign countries for equipment; it allowed the cities 17 million more workers and helped towards industrialization, demonstrating that it was not all together an economic failure, yet this caused a massive disruption in the country as millions of people were relocated, the existence of internal passports at this time shows how much movement was happening. Politically they succeeded in driving the communist message into the countries, as well as having party members in every village, spreading the communist beliefs and informing on opposition, as well as gaining international recognition for the rapid improvements in industry. However in terms of humanity, collectivisation caused millions to die unnecessarily; it took years for grain crops to reach pre-collectivisation levels, and even when they did they now had to feed millions of workers, be used for export and trade, and feed the peasants themselves, resulting in famines and deaths of millions. Collectivisation seemed to show no mercy towards peasants, their families or their property, and the means to do not justify the ends when we look at the sheer human cost. ...read more.