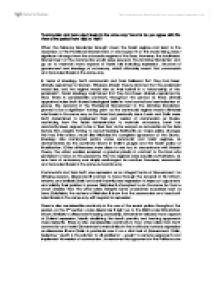 'Communists and Tsars ruled Russia in the same way.' How far do you agree with this view of the period from 1855 to 1964?

'Communists and Tsars ruled Russia in the same way.' How far do you agree with this view of the period from 1855 to 1964? When the February Revolution brought down the Tsarist regime and lead to the ascension of the Provisional Government, it was hoped that this would bring about significant change from the autocratic regime of the Tsars. However, the totalitarian Government of the communists would seize power in the October Revolution and go on to maintain many aspects of Tsarist rule including repression, structure of government and ideology of autocracy, which ultimately meant that communists and tsars ruled Russia in the same way. In terms of ideology, both communists and Tsars believed that they had been divinely appointed to Govern. Whereas Marxist theory dictated that the proletariat would rise, and the regime would rule on their behalf in a 'dictatorship of the proletariat', Tsarist ideology maintained that they had been divinely appointed by God. There is considerable continuity throughout the period as these divinely appointed rulers both shared ideological belief in total control and centralisation of power. The removal of the Provisional Government in the October Revolution proved to be a significant turning point as the communist regime would ultimately rule Russia in the same way as the Tsars had previously done. ...read more.

There is also considerable continuity in how other rulers from both communist and tsarist Governments were similar in their attitudes towards repression as Alexander III and Stalin in particular saw it as a vital tool of Government. Stalin, believing ''death is the solution to all problems'', sought to remove opponents and implement his version of communism, he removed his opponents in the Politburo one by one in much the same way as Alexander III had sought to reverse the reforms of his father by driving opponents underground. One can also point out that communists and tsars ruled Russia in the same way through the continual use of propaganda. Whereas this was mostly done through the arts and churches under Tsarist Rule, there is also evidence of change as the communists heavily intensified propaganda. Rising literacy rates under Lenin meant that the media could increasingly be used in addition to the continual use of the arts, everywhere in Russia there were statues and photographs of Stalin and Lenin was repeatedly photographed in symbolic clothing much like the Tsars before him. The use of the church returned too, Stalin allowed for the return of the churches during the Great Patriotic War in an attempt to boost patriotic spirit. ...read more.