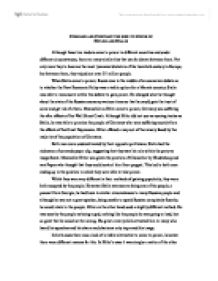 Compare and Contrast the rise to power ofHitler and Stalin

COMPARE AND CONTRAST THE RISE TO POWER OF HITLER AND STALIN Although these two leaders came to power in different countries and under different circumstances, there are many similarities that can be drawn between them. Not only were they to become the most tyrannical dictators of the twentieth century in Europe, but between them, they wiped out over 25 million people. When Stalin came to power, Russia was in the middle of an economic debate as to whether the New Economic Policy was a viable option for a Marxist country. Stalin was able to manoeuvre within this debate to gain power. He changed what he thought about the state of the Russian economy various times so that he could gain the trust of some and get rid of others. Meanwhile as Hitler came to power, Germany was suffering the after effects of the Wall Street Crash. ...read more.

Hitler on the other hand used a slightly different method. He was seen by the people as being a god, nothing like the people he was going to lead, but so great that he could not be wrong. His great oratory skills attracted him to many who heard his speeches and his charm and charisma only improved his image. In both cases there was a lack of a viable alternative to come to power, however there were different reasons for this. In Hitler's case it was simply a matter of the other politicians being unsuited to their jobs. Stalin however purposely set out to get rid of his opposition. He was manipulative with Lenin in his last years in such a way that he seemed to be Lenin's choice of leader. Other alternatives such as Trotsky and Bukharin were sidelined by Stalin and his triumverate with Zinoviev and Kamenev who were both later evicted from the party. ...read more.

Germany as a country was patriotic and nationalist. Hitler offered a system where expansionism was important and the overturning of the Treaty of Versailles was seen by many to be the way to return Germany to its former glory. Russia was however isolationist and Stalin stood for Socialism in one country where some of his opponents such as Trotsky saw world revolution as the way forward. Although both of the countries wanted opposite things, both Hitler and Stalin stood for what the people of their respective countries were looking for at the time. Although the two dictators went on to become very different leaders, there are some similarities in the way in which they came to power. That is not to say that they were in the same position but they were both able to use the circumstances they were faced with to their advantage. ...read more.