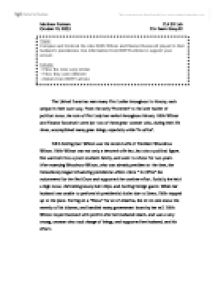 Compare and Contrast the roles Edith Wilson and Eleanor Roosevelt played in their husband's presidencies. Use information from BOTH articles to support your answer.Include:~How the roles were similar&amp;...

The United States has seen many First Ladies throughout its history, each unique in their own way. From the early "Hostesses" to the later holder of political status, the role of First Lady has varied throughout history. Edith Wilson and Eleanor Roosevelt were just two of these great women who, during their life times, accomplished many great things, especially while "In office". Edith Bolling Galt Wilson was the second wife of President Woodrow Wilson. Edith Wilson was not only a devoted wife but, but also a political figure. She was born into a poor southern family, and went to school for two years. After marrying Woodrow Wilson, who was already president at the time, she immediately began influencing presidential affairs. ...read more.

Eleanor Roosevelt was the wife of President Franklin Delano Roosevelt. Eleanor was such a Strong and out-going person that she held her very own press conference just two days after FDR was inaugurated. In fact she held the first press conference ever held by a First Lady. Eleanor was a traveling woman, and she did just that, quite a bit while "In Office". In her travels she brought back numerous persons to meet the president. Also she made some trips for her husband, who could not travel easily, after being diagnosed with polio. Eleanor was a very important liaison between the president, and the general public, as well as his troops overseas during the war. ...read more.

While Edith was more supportive of her husband and his affairs, Eleanor supported her husband, while also developing her own causes, and pursuing her goals. The Role of First Lady in America is a position that really has no rules, but many expectations. These expectations are set by the woman that came before them, however mighty or insignificant the effects their presence in White House. Over the history the role of The First Lady has evolved. It has evolved with woman them selves, and how they have been viewed in society, past and present. And as this evolution continues the possibilities of what could come about are endless. Maybe one day even a First man will accompany his wife through her presidency. Matthew Forman ELA 9R Lab October 15, 2003 ELA Exam Essay #2 ...read more.