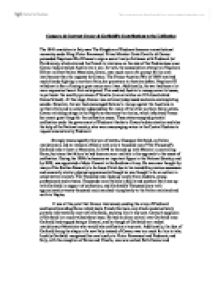 Compare & Contrast Cavour & Garibaldi's Contributions to the Unification The 1848 revolution in Italy saw The Kingdom of Piedmont become a constitutional monarchy under King Victor Emmanuel. Prime Minister Conte Camillo di Cavour persuaded Napoleon III of France to sign a secret treaty of alliance with Piedmont (at Plombieres), which allowed the French to intervene on the side of the Piedmontese once Cavour had provoked Austria into a war. In truth, the assassination attempt on Napoleon III by a militant Italian Mazzinian, Orsini, was much more of a prompt for his own involvement than the requests by Cavour. The Franco-Austrian War of 1859 involved much b****y fighting in northern Italy, but premature to Austrian defeat, Napoleon III withdrew in fear of losing a great many more lives. Additionally, the war had been a lot more expensive than at first anticipated. This enabled Austria to recoup some its losses, in particular the wealthy province of Venetia (in an armistice on 24th June behind Cavour's back). At this stage, Cavour was extremely depressed and even contemplating suicide. However, the war had encouraged Italians to rise up against the Austrians in northern Italy and to achieve independence for many of the other northern Italian states. ...read more.

He was anti-clerical, and his main political policy was entitled 'Le juste milieu', a 'happy mean' between revolution and reaction. He was a brilliant businessman and a great moderniser within Piedmont. His main objective was to drive the Austrians out of the Italian states. He thought that once this had been achieved, if Piedmont could control Lombardy and Venetia, then it could dominate the rest of Italy without having to take it over. Garibaldi on the other hand insisted that unification of Italy was essential. He even, to a certain extent, encouraged Cavour to help unify the whole of Italy. Giuseppe Mazzini was the man who influenced Garibaldi in taking up the cause for Italian unification. The two revolutionists had met years prior to the 1848 revolution and Mazzini instilled in Garibaldi a desire for unification at any cost. This was one of the things which Cavour was extremely suspicious about, and a large factor in the decision for Cavour's interception of Garibaldi's Thousand. It is important to remember that Cavour had recently lost control over Garibaldi, when Garibaldi had stopped being a General. Cavour's suspicion certainly destroys the myth surrounding the Risorgimento of the two working together to fight for a cause. ...read more.

However, his loyalty to Victor Emmanuel made the idea impossible. Garibaldi's thought a Republic was the only form of government that could bring about a strong country in which all the people are satisfied. Cavour though thought a Republic was a radical form of government. He was afraid of Garibaldi turning southern Italy into a Republic, which could compete with Piedmont, and this was another reason he intervened when he did. One of Cavour's most important contributions to unification were the economic reforms he made (e.g. building up of industries, factories, railway lines etc.) which helped to make Piedmont stronger than ever before. Garibaldi did nothing of the sort, and therefore when assessing the contributions of the two, it is important to remember that without Garibaldi's military successes, he had nothing. Both Cavour and Garibaldi were essential in helping to unify Italy. They were not the only two figures however. Mazzini stood as the 'Godfather' to all the Mazzinian tactics that many revolutionists used, and the writings of Balbo and Gioberti inspired many. It can be said that without one of them, unification would have been far less likely, but a combination of unlikely circumstances meant that, by accident, unification seemed to suddenly be within touching distance of Italy. It just finally required Cavour and Garibaldi to reach out and grab it. ...read more.