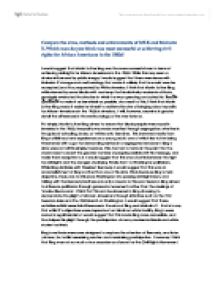 Compare the aims, methods and achievements of MLK and Malcolm X. Which man do you think was most successful at achieving civil rights for African Americans in the 1960s?

Compare the aims, methods and achievements of MLK and Malcolm X. Which man do you think was most successful at achieving civil rights for African Americans in the 1960s? I would suggest that Martin Luther king was the more successful man in terms of achieving civil rights for African Americans in the 1960s. While this may seem a choice influenced by public image, I would suggest that there were issues with Malcolm X's image and methodology that made it unlikely that he would ever be accepted (and thus, respected) by White America. I think that Martin Luther King, while viewed by some blacks with contempt for his relatively moderate attitude, genuinely evaluated the situation in which he was operating and suited his modus operandi to make it as beneficial as possible. As a result of this, I think that Martin Luther King made it easier for himself to achieve his aims of bringing about equality for African-Americans in the 1960s in America. I will, however, examine in greater detail the differences in the methodology of the men later on. Put simply, Martin Luther King aimed to ensure that black people were equal in America in the 1960s. Inequality was made manifest through segregation, whether in the guise of schooling, buses, or 'whites only' benches. This stemmed mostly from King's childhood and experiences as a young adult, one of which led to him being threatened with a gun for demanding service in a segregated restaurant. ...read more.

But the mass action used in initiatives such as the March on Washington in 1963 made black issues impossible to ignore, and helped black people experience solidarity and ubiquity in their anonymity and numbers. King himself proclaimed: "The n***o is shedding his fear", and while this is something King was worried about, I think that this is something that was in fact brought about by King. Black people in America could now see that it was acceptable to feel insulted; angry and bitter about the injustices of slavery. Because of this, I would suggest that Martin Luther King succeeded in his aims as I would suggest it was his methodology of mass action that inspired black people to rise up, and the White House (and people) to sit up and listen. However, there was to be another character with what some today would consider a more direct influence on the position of black people in 1960s America. Malcolm X approached the Civil rights struggle in America in the 1960s in a very different manner to King indeed, and I would suggest that in spite of his iconographic status, he largely failed in his aims. X aimed to rail against the whole idea of demanding Civil Rights, suggesting that black and white men could never be truly equal. X regarded black people as Africans 'who just happened to be in America', and as such X took up a position described by Cornell as 'The basic aim... ...read more.

To conclude, I would suggest that while both Martin Luther King and Malcolm X had flaws which, ultimately, crippled the growth of the Civil Rights Movement, they both contributed in significantly different ways to the fight for black Civil Rights. While I would contend that the theological and occasionally violence beliefs of Malcolm X made him seem unacceptable to white America, I think that his effective martyrdom resulted in disaffected black youths returning to political activism after they felt shunned by what they perceived to be 'Uncle Tom' behaviours on the part of King. One could, I feel, successfully argue that X's increased appeal also came from his 'everyman' upbringing in Harlem, and that black youths could not truly identify with a Southern minister. In addition,one could argue that King's campaign depended on violence as much as X's. If King's activists and followers were not viciously suppressed, I doubt that moderate America would have eventually got round to championing their cause, evidenced by the fact that approximately a quarter of participants in the 'March on Washington' 1963 were white. However, I would suggest that King's populism was to raise a number of black activists and student dissenters that would result in white America being cowed by the influence of millions of African-Americans, and, finally, result in the Civil Rights that black America had been fighting for. ...read more.