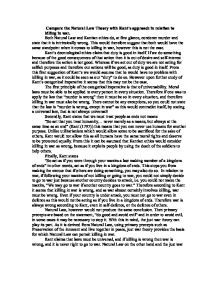 Compare the Natural Law Theory with Kant's approach in relation to killing in war.

Compare the Natural Law Theory with Kant's approach in relation to killing in war. Both Natural Law and Kantian ethics do, at first glance, condemn murder and state that it is intrinsically wrong. This would therefore suggest that both would have the same standpoint when it comes to killing in war, however this is not the case. Kant's deontological ethics claim that duty is good in itself. If we do something because of the good consequences of that action then it is out of desire and self-interest and therefore the action is not good. Whereas if we act out of duty we are not acting for selfish purposes and therefore our actions will be good, as duty is good in itself. From this first suggestion of Kant's we would assume that he would have no problem with killing in war, as it could be seen as our "duty" to do so. However upon further study of Kant's categorical imperative it seems that this may not be the case. ...read more.

Finally, Kant states "So act as if you were through your maxim a law making member of a kingdom of ends" in other words, act as if you live in a kingdom of ends. This stops you from making the excuse that if others are doing something, you may also do so. In relation to war, if following your maxim of not killing or going to war, you could not simply decide to go to war just because another country decides to attack, i.e. you could not make the maxim, "We may go to war if another country goes to war." Therefore according to Kant it seems that killing in war is wrong, and as war almost certainly involves killing, war must be wrong. Even if your country is under attack, you must not go to war even in defence as this would not be acting as if you live in a kingdom of ends. Therefore war is always wrong according to Kant, even in self-defence, or the defence of others. ...read more.

Resort - all other peaceful methods should already have been attempted Reasonable chance of success Comparative justice This would not be supported be Kant, as he would state that these conditions allows for exceptions to the rule, which would be unacceptable. Natural Law relies of the primary precepts. One of these is the protection of the innocent, which would permit killing in war if by doing so innocent lives are saved. This is in direct contradiction to Kant's principle of not using humans as means to an end, which would not support mistreatment of some to save others. Although it would appear that Kantian and Natural Law ethics would have a similar standpoint when concerning killing in war, upon closer inspection it appears that they do not. Both are deontological ethics and concern the morality of actions themselves and not consequences, yet Kantian ethics push this further and insist on universal rules that will not allow for exceptions. Whereas Natural Law allows for exceptions to a normally absolutist rule if it supports one of the Primary precepts. ?? ?? ?? ?? ...read more.