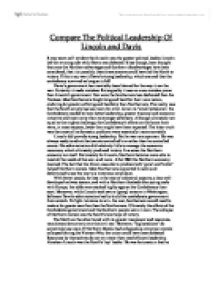 Compare The Political Leadership Of Lincoln and Davis.

Compare The Political Leadership Of Lincoln and Davis It may seem self- evident that Lincoln was the greater political leader; Lincoln led the winning side while Davis was defeated. It has though, been thought that once the Northern advantages and Southern disadvantages have been considered, that it is possible, that almost anyone could have led the North to victory. If this is so, was it Davis's strong leadership, which ensured that the confederacy survived as long as it did? Davis's government has inevitably been blamed for the way it ran the war. Certainly it made mistakes. But arguably it was no more mistake prone than Lincoln's government. Nor were the Southerners less dedicated than the Yankees. Most Southerners fought long and hard for their new nation, enduring far greater suffering and hardship than Northerners. The reality was that the South simply has less room for error. ...read more.

Most Northerners supported Lincoln and determined to see the war to a victorious conclusion. With fewer people, far less in the way of industrial capacity, a less well-developed railway system, and with a Northern blockade disrupting trade with Europe, the odds were stacked highly against the Confederacy from start. Moreover, while Lincoln took over a 'going' concern in Washington, Jefferson Davis's administration had to build the confederate government from scratch. To fight- let alone to win- the war, Southerners would need to make a far greater sacrifice than the Northerners. Ultimately the efforts of the Confederate government and the Southern people were in vain. The collapse of Northern morale was the South's best hope of victory. The North on the other hand, with its greater manpower and resources, was always favourite to win the civil war. ...read more.

Lincoln is generally seen as more successful in communicating with the people, more skilful in keeping political factions working together for a common goal, and better able to endure criticism and work with his critics. He is lauded for keeping all his commanders (including Grant) on a leash, for appointing the final winning military team, for picking able administrative subordinates, and for knowing how to delegate. Davis, on the other hand is often seen as austere, rigid, humourless and prone to making enemies: his feuds with two of his top generals, Beauregard and Joe Johnston, undoubtedly harmed the Southern war effort. Lincoln's superiority to Davis might seem self- evident. But Lee could think of no Confederate leader who had done a better job than Davis. And Lincoln did make mistakes. He went through six failures as commanders in the Virginia theatre before he found the right general. Some of his other military appointments and strategic decisions can also be criticised. It is worth remembering Wendell Phillips' view of him: 'He is a first-rate, second-rate man'. ...read more.