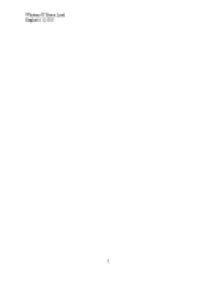 ﻿Whitney O?Brien Lord English 112-015 ________________ African Americans are privileged to have had leaders who fought for a difference in Black America. Martin Luther King, Jr. and Malcolm X are two powerful men in particular who brought hope to Blacks in the United States. Both preached the same message about Blacks having power and strength in the midst of all the hatred that surrounded them. Even though they shared the same dream of equality for their people, the tactics they implied to make these dreams a reality were very diverse. The background, environment and philosophy of both men were largely responsible for the distinctly varying responses to American r****m. Martin Luther King Jr. was born into a middle classed family on January 15th 1929. His Birth paper stated his name as Michael Luther King but he later had it changed to Martin. He was one of three children born to Martin Luther King Sr. the pastor of Ebenezer Baptist Church, and Alberta King, a former schoolteacher. Malcolm X on the other hand, was born Malcolm Little on May 19, 1925 into a poor family. He was one of the eight children born to Louise Norton Little, a homemaker and Earl Little, an outspoken Baptist minister and avid supporter of Black Nationalist leader Marcus Garvey. ...read more.

Malcolm X was full of hate, anger, and vengeance. He was a dark presence, an angry, cynical, implacable man whose good will or forgiveness or even pity the white race could neither earn nor buy. "Coffee," he once remarked in an interview, "is the only thing I like integrated." He also pleasantly mentioned that whites were inherently enemies of the n*****s and that integration was impossible without great bloodletting. Nonviolence was as he put it, "a mealy-mouth, beg-in, wait-in, plead-in kind of action," and it was only a device for disarming the blacks. He also believed that everything we had heard to the contrary from the Martin Luther Kings and the Roy Wilkins? and the Whitney Young?s was a deadly dangerous pack of lies. "That's etiquette," he said. "Etiquette means to blend in with society. They are being polite. The average n***o doesn't even let another n***o know what he thinks, he's so mistrusting. I'm black first- my whole objectives are black, my allegiance is black. By me being a Muslim, I'm not interested in American, because America has never been interested in me. He married Betty X Sanders on January 14th 1958. Both Malcolm X and King spread their views through assertive, hard-hitting, powerful speeches. Nevertheless, their intentions were delivered in different styles and purposes. ...read more.

Martin Luther King and Malcolm X shared a similar dream. A dream that one day their people would be able to be free from the bondage of prejudice and r****m, in which they were held captive. They are remembered as martyrs who fought for the cause of Black America, and who gave hope to their people in times of desperate struggle. They were individuals who were ahead of their time and who died prematurely, working for a goal yet to be achieved. Two separate people both fighting for one main cause. The goal of equality and justice among all races. I honestly would have to say after reviewing the lives of both men I identify more with the teachings of Dr. King. It was not just his peaceful nature of going about his protests but certain lines in his speeches reside with me as an individual today. Two such quotes being, ?Our lives begin to end the day we become silent about things that matter?, and ?Let no man pull you low enough to hate him?. Even though I identify more with Dr. King both men will be seen as heroes for many generations to come and will continue to inspire me and others to fight for what we believe, because at the end of the day it is not the color of your skin that counts but your character. ...read more.