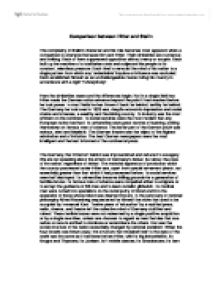 Comparison between Hitler and Stalin.

Comparison between Hitler and Stalin The complexity of Stalin's character and his role becomes most apparent when a comparison is attempted between him and Hitler. Their similarities are numerous and striking. Each of them suppressed opposition without mercy or scruple. Each built up the machine of a totalitarian state and subjected his people to its constant, relentless pressure. Each tried to remould the mind of his nation to a single pattern from which any 'undesirable' impulse or influence was excluded. Each established himself as an unchallengeable master ruling his country in accordance with a rigid 'Fuhrerprinzip'. Here the similarities cease and the differences begin. Not in a single field has Hitler made the German nation advance beyond the point it had reached before he took power. In most fields he has thrown it back far behind; terribly far behind. The Germany he took over in 1933 was, despite economic depression and social strains and stresses, a wealthy and flourishing country. Its industry was the most efficient on the continent. Its social services were the most modern that any European nation had had. Its universities were great centres of learning, priding themselves on famous men of science. The better part of the German youth was serious, alert and idealistic. The German theatre was the object of the highest admiration and of imitation. ...read more.

This is not meant to cast any reflection on the Russian national character - Russia's 'backward, Asiatic' condition has been her tragedy, not her fault. Stalin undertook, to quote a famous saying, 'to drive barbarism out of Russia by barbarous means'. Because of the nature of the means he employed, much of the barbarism thrown out of Russian life has crept back into it. The nation has, nevertheless, advanced far in most fields of its existence. Its material apparatus of production, which about 1930 was still inferior to that of any medium-sized European nation, has so greatly and so rapidly expanded that Russia is now the first industrial power in Europe and the second in the world. Within little more than one decade the number of her cities and towns doubled; and her urban population grew by thirty millions. The number of schools of all grades has very impressively multiplied. The whole nation has been sent to school. Its mind has been so awakened that it can hardly be put back to sleep again. Its avidity for knowledge, for the sciences and the arts, has been stimulated by Stalin's government to the point where it has become insatiable and embarrassing. It should be remarked that, although Stalin has kept Russia isolated from the contemporary influences of the west, he has encouraged and fostered every interest in what he calls the 'cultural heritage' of the west. ...read more.

For of Stalinist Russia it is even truer than of any other revolutionary nation that 'twenty years have done the work of twenty generations'. For all these reasons Stalin cannot be classed with Hitler, among the tyrants whose record is one of absolute worthlessness and futility. Hitler was the leader of a sterile counter-revolution, while Stalin has been both the leader and the exploiter of a tragic, self-contradictory but creative revolution. Like Cromwell, Robespierre and Napoleon he started as the servant of an insurgent people and made himself its master. Like Cromwell he embodies the continuity of the revolution through all its phases and metamorphoses, although his role was less prominent in the first phase. Like Robespierre he has bled white his own party; and like Napoleon he has built his half-conservative and half-revolutionary empire and carried revolution beyond the frontiers of his country. The better part of Stalin's work is as certain to outlast Stalin himself as the better parts of the work of Cromwell and Napoleon have outlasted them. But in order to save it for the future and to give to it its full value, history may yet have to cleanse and reshape Stalin's work as sternly as it once cleansed and reshaped the work of the English revolution after Cromwell and of the French after Napoleon. From Stalin, A Political Biography, I. Deutscher, Oxford University Press, 1949., ...read more.