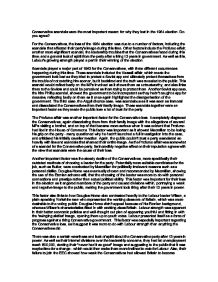 Conservative scandals were the most important reason for why they lost in the 1964 election. Do you agree?

Conservative scandals were the most important reason for why they lost in the 1964 election. Do you agree? For the Conservatives, the loss of the 1964 election was due to a number of factors, including the scandals that affected their party's image during this time. Other factors include the Profumo affair, another more significant scandal, the leadership troubles that the Conservatives faced during this time, and a general lack of spirit from the party after a tiring 13 years in government. As well as this, Labour's growing strength played a part in their winning of the election. Scandals played a major part of 1963 for the Conservatives, with three different occurrences happening during this time. These scandals included the Vassall affair, which made the government look bad as they tried to protect a Soviet spy and ultimately protect themselves from the trouble of not catching him sooner, but it backfired and the truth was revealed to the public. This scandal would reflect badly on the MPs involved as it shows them as untrustworthy, and also links them to the Soviets and could be perceived as them trying to protect them. ...read more.

Again, the public couldn't trust a party associated so heavily with lies and scandals that shamed their entire image. As the Profumo affair was somewhat of a scandal for the Conservative party, its incredibly negative affect on their reputation agrees with the view that scandals were the cause of their loss. Another important factor was the steady decline of the Conservatives, more specifically their outdated methods of choosing a leader for the party. Potentially more suitable candidates for the job, such as Butler, were overlooked by Macmillan for politically irrelevant reasons such as a personal dislike. Douglas-Home was eventually chosen and recommended by Macmillan, showing the use of the Etonian scheme still, that the choosing of the leader was more to do with personal connections and prestige rather than actual political ability. This factor was important for their loss in the election as it angered members of the party and caused divisions within, portraying a weak and negative image to the public, making the government look tiring after their 13 years in power. ...read more.

These things showed how the Conservatives were tiring and losing their grip on Britain and the public would see their failures in a negative light, wanting a change and voting for Labour instead. As the scandals were a part of the Conservative decline, this also suggests that an important reason for their defeat was the general decline. In conclusion, the most important reason for Conservative loss was their growing weakness and tiring government, as well as the fact that many of the voting public just wanted a change after 13 years of the Conservatives. Many factors link together to form this, the scandals, Profumo affair, their economic and international failures which all individually portrayed a bad image to the public, together interlocking to create the negative image that they held in 1964. Although the Labour government were stronger, had the Conservatives not had scandals and divisions denting their image then they could have potentially won the election again, especially Labour only won narrowly. Conservative scandals were the most important reason for their loss, when combined with the other reasons that also made them weaker. ...read more.

****
A very good essay - it is a little light on detail but all the leads are there, they just need to be better developed and supported with persuasive evidence. The answer highlights a range of causal factors and presents them in a succinct way - many factors need to be weighed up against the historical significance of the scandals throughout the answer - there isn't always a sense of that in this answer. There are however, many good links back to the question, links between factors and some strong analytical statements. To improve the answer further, a stronger, more persuasive/rigorous interrogation of the proposition in the question would be needed.

The student is focused for the entire essay and proves this by addressing the terms of the question in the first few paragraphs, which shows the examiner that they have an immediate understanding and aren't struggling to find something relevant ...

The student is focused for the entire essay and proves this by addressing the terms of the question in the first few paragraphs, which shows the examiner that they have an immediate understanding and aren't struggling to find something relevant to write. They discuss a wide range of different reasons for Conservative decline, which is good because they are showing they are capable of understanding more than one interpretation. One improvement they could make is to quote a historian, as this would show they have read around their subject and are able to understand academic texts as well as A Level ones. Due to a lack of books on the subject, this can be a bit difficult for a period as modern as the 1960s, but when I studied it, it was perfectly valid to quote something like an Andrew Marr book, and if you find a few general quotes on broad areas it will be easy to remember and can be used in a variety of essays (such as a quote about the economy in the 1960s could be relevant for affluence, unemployment, inflation, politicians who held the office of Chancellor, general image and so on).

The student uses an excellent range of evidence, which shows they can back up their understanding of what happened with proof. The use of precise numbers - such as "they let unemployment reach 800,000" - is good because the student is demonstrating they understand what makes an unemployment figure a high one and what makes it a low one. The essay stands out as the student is able to quote several names - some students fall into the trap of just talking about Macmillan and Profumo because they were the ones the teacher had talked about the most. A problem in my class when writing about the Profumo Affair was that some students often started telling the story rather than analysing it, which is bad because anyone can simply remember details of an event (especially a scandalous one), but not everyone can say why what happened was so important. However, this student gives basic details and relevant evidence but then goes on to say why it was damaging to the Conservatives, not simply how it was damaging. For example, instead of just saying what happened during the Profumo Affair, the student explains why it was damaging to the leadership Harold Macmillan, showing the examiner that they understand what the knock-on effects were. The conclusion is excellent because it says why one reason was more important than another, which is good as examiners look for an awareness of the advantages and disadvantages of interpretations.

The spelling, grammar and punctuation are excellent. The student could improve the essay by taking care over how they express themselves: at one point they say "the working class era of Britain", when in fact all eras of British history have had more than one class, and it would make more sense to miss "era" out altogether. This is the kind of mistake that would easily be picked up when checking at the end, so always leave some time in an exam to re-read what you have written. The essay would also benefit from more technical words such as "cause" that are expected at this level of qualification: instead of "which would then make them more inclined to vote for Labour", "this could cause them to vote Labour" leaves no doubt that they clearly understand the effect that one historical event has on another. That said, this is an excellent essay that would probably gain high marks.